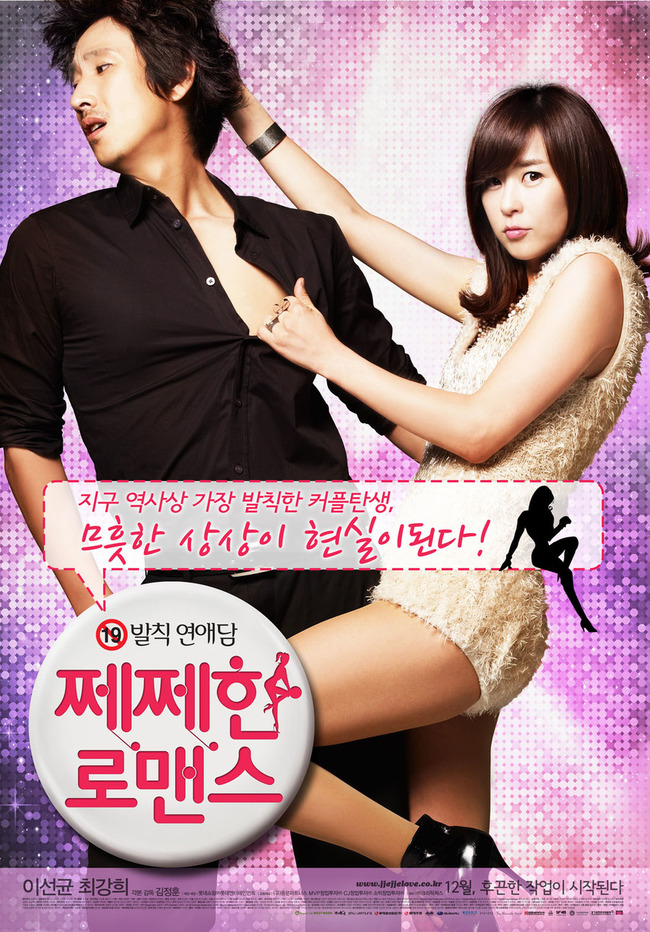 Anybody else looking forward to seeing the comedy Pretty Romance (쩨쩨한 로맨스) next month?

I think it looks like fun myself. And with a very egalitarian first couple of promotional posters, featuring both “sexperts” in their underwear, then I’d hesitate to begin describing the promoters as sexist bigots.

But still, the above is the second poster now to have actress Choi Kang-hee (최강희) wearing a much more risqué costume and/or showing much more skin than actor Lee Seon-gyun (이선견). And this imbalance is repeated across most of the adults-only section of the movie website too:

Sure, it’s hardly the most egregious case out there, and javabeans does give kudos to the movie for at least “letting the girl be the aggressor”. But it does raise the interesting issue of how sex-themed movies (presumably) aimed at both sexes seem to be marketed as if they were just for a male gaze, and not just in Korea.

Recall some of the posters for Ogamdo (오감도; see #8 here) last year for instance, which led some female commenters over at DramaBeans to worry that watching it would simply be a waste of time for them:

But regardless of if that did turn out to be the case or not (I haven’t seen it myself), can anyone think of any promotional material for similar sex-themed films that fetishized the male form just as much as the female one? Or is only the latter effectively the default and almost universal choice?

2) Filipino student kicked out of Korean university for being gay

Also see #3 here for more information about depictions of homosexual relationships on Korean television in general (or rather the lack thereof), and #1 here for a recent controversy surrounding the shooting of the drama in a church.

I kid you not: not only did 81% of middle and high-schools surveyed have them, but they’re both very detailed and regularly enforced, recently “a male and female student of a high school in Ansan, Gyeonggi Province, [receiving] a penalty of three-day service in school for their standing within 50 centimeters of each other at a bus stop” for instance.

See The Hankyoreh for further details. Naturally, there’s no mention of any rules for dating and physical contact between students of the same sex.

5) What socializes and sustains deferential behavior in Koreans?

Neo-Confucian deference to males is at the core of Korea’s poor gender relations, and to outside observers it is often both frustrating and confounding how it persists despite its fundamental conflict with most other ideologies that Koreans espouse to, such as democracy, liberalism, and feminism.

As Gord Sellar discusses here though, recent studies show that part of the answer may be because what one is socialized to at an early age literally becomes hardwired into the brain.

Take this quick quote from Tufts Magazine’s article on the studies, with Gord Sellar’s emphases. And at the very least, I am now intrigued by the implications for understanding Korean advertising:

… what accounts for strong differences in preferences, leading to very different actions in the real world?

Part of the answer might lie in a similar set of studies done by Freeman. He measured the brainwaves of American and Japanese subjects who were shown silhouettes of bodies in postures categorized as “dominant” and “subordinate” (for example, one of someone standing tall with arms crossed and another of someone with head bowed and arms hanging). “It’s been known for a long time that Western cultures encourage dominance and Japanese cultures more subordination in line with collectivist thinking,” Freeman says. “I was looking to see if these East Asians and Westerners perceive dominant and subservient bodies in a different way.”

The results, published in the journal Neuroimage in April 2009, indicate that here, too, people often travel the same route yet end up at destinations miles apart. The silhouettes matching cultural preferences activated another distinct area of the brain in both groups: the limbic reward system. This is the system that releases dopamine into the bloodstream in response to pleasurable stimuli such as drugs, sex, or food. But it’s also engaged whenever the brain wants to tell the body to go after something in the outside world—to pick up a desired cup of coffee or grab a favorite magazine off the rack.

This selection from Pink Tentacle may seem like a strange choice here at first. But like our discussion of 2009 Korean buzzwords demonstrates, many do ulitmately make it over to Korea.

Here’s my vote for the first of those 60 to do so:

7) The dashed dreams of a Gyopo woman

An interesting, if somewhat bitter-sounding take on dating in Korea from the perspective of a Gyopo woman. Anybody have an opinion on how representative her experiences are?

Not strictly related to Korea sorry, but from what I can gather from the article at io9 says, this is a very underdeveloped field that is only set to grow as societies become more obese. And given existing Korean expertise in cosmetic surgery and its ambitions for medical tourism, then it wouldn’t surprise me if this was a procedure regularly offered in Korea within the next 5 years.

9) Jessica of Girls’ Generation most popular celebrity among Korean lesbians

That’s according to an article in Come Together, a magazine published by Yonsei University’s LGBT club which claims to be “Korea’s first campus association for gay college students.”

Yes, I think it’s an interesting name for a magazine too.

But more notable for the way it was promoted, which was by the now standard practice of pre-releasing an overtly sexual teaser of it with the aim of gaining publicity for it by getting it banned and/or generating controversy:

I am unsure if it was actually banned sorry – I’ve been a little distracted the last few weeks – but the finished product is definitively much tamer:

Like Johnelle at SeoulBeats notes of it though, “it’s funny how in almost every Korean (and Japanese) MV that has a sexy concept they have only (or mostly) foreign girls/models tramping it up”. Do you think that’s true, or is it an exaggeration? I can say that it’s definitely the case for advertisements and the print media, but unfortunately I find it difficult to keep up with most K-pop these days.