Do crosswalk lights with only male-shaped figures really discriminative against females? That’s a hard sell on any occasion, let alone when it would cost 21 million dollars to replace them all with both male and female ones instead, and so netizens have rightfully “responded with merciless mockery” to the Seoul Metropolitan Government’s plan. As has the cartoonist Ju Ho-min too, whose humorous extension of the city’s logic needs no translation!

Instead, a much better candidate for signs to replace would be these ubiquitous reminders that it’s only women that should look after children:

Women do look after children of course, and so technically signs like these aren’t discriminatory in themselves. But as this photo and those below make clear, they’re not just not countered by equal numbers of signs showing men taking care of children, but in fact female figures are only used when a child is also involved: 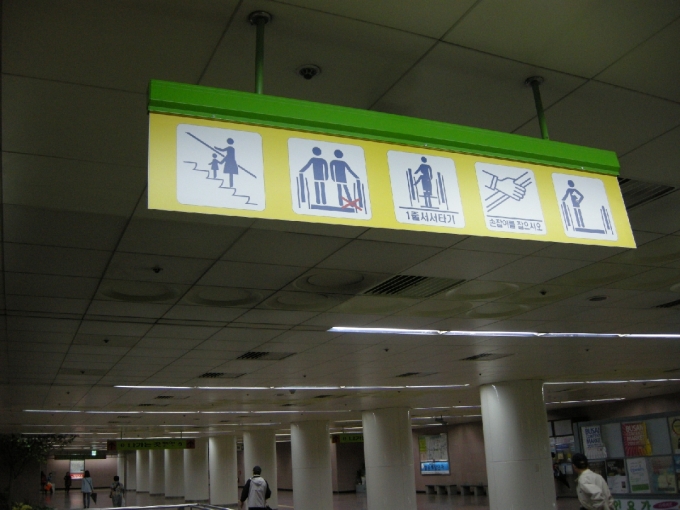 Lest I sound like I’m singling Korea out for criticism however, note that such images are almost universal, and indeed the above ones look almost exactly the same as those in Dublin airport. Moreover, once you move away from signs to language instead, then, possibly following overseas examples, actually discriminatory English slogans are sometimes chosen rather than making Korean ones, such as with airline Asiana’s “Happy Mom Services”. Or alternatively, consider the 부산국제임신출산육아박람회 that I learned about today, which would simply be “The Busan International Pregnancy, Childbirth, and Childcare Exposition” in English, but which somehow got translated as “The 9th Busan Mom & Baby Fair” instead: 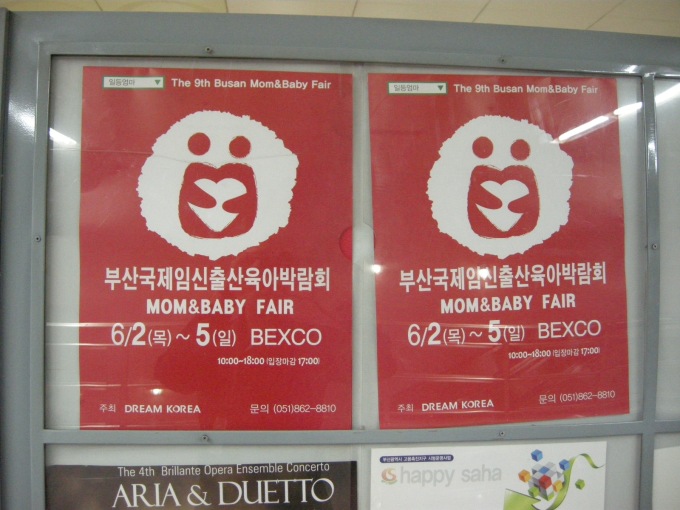 As it’s not just for moms and babies if you can read the Korean though, then accordingly there are many fathers and would-be fathers featured on the website, and actually I was one of them myself back in either 2005 or 2006 before my first daughter was born. I don’t recommend going though, as I recall finding some of the services being promoted there – stillbirth insurance for example – just a little cold and off-putting!

Finally, for some Korean takes on subway signs that I managed to find, see here and here. Unfortunately, they’re a little old (2004 and 2006 respectively), which suggests that no-one’s really thought about them in a while. But on the plus side, the Seoul Metropolitan Government’s misguided plans have at least brought national attention to the issue of (potential) sexual discrimination in signs, so now may well be the best opportunity ever to suggest that something be done about them. Ideally, by using the money earmarked to change the crosswalk ones to change the subway ones instead.

If anybody knows how to go about contacting them, then that would be much appreciated!

(For all posts in the Korean Sociological Image series, see here)