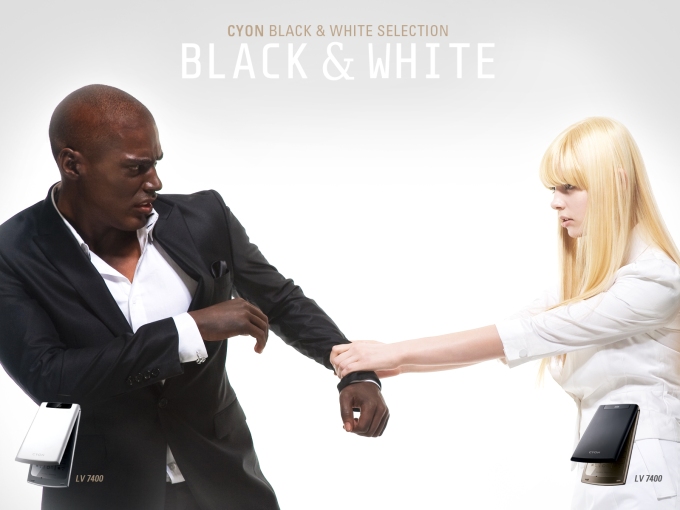 Spare a thought for the hapless LG Cyon marketing department. Because after 12 years in the business, it must be really difficult to think of interesting names for new phones.

No, really: how else to explain the singularly uninspired choice of “Black and White” for the latest, well, black and white LV-7400 phones to come out? Sure, the likes of “Lollipop” and “Ice Cream” may hardly have been all that creative either, but at least they spawned quirky and memorable advertising campaigns, whereas this series of advertisements for the LV-7400 seems dull, uninspired, and above all too literal. In fairness though, they do provide an instant and dramatic representation of the product, and the commercial itself has a mild eroticism and sensuality to it that compels you to look more closely.

But of course, it’s not those that made me sit up and take notice: 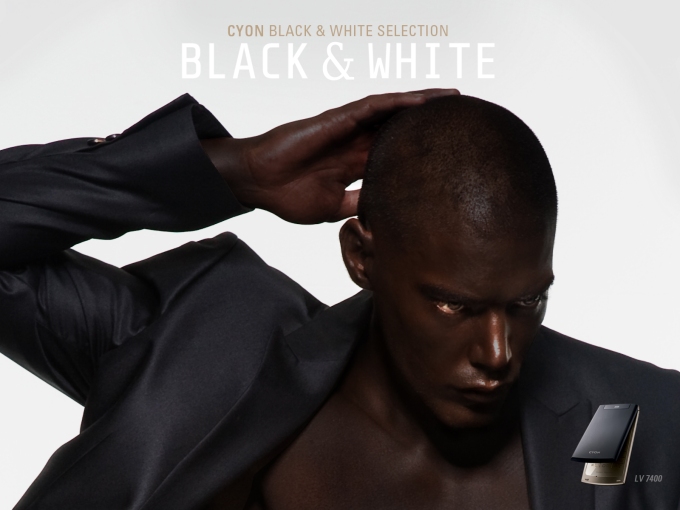 Yes, that is indeed not a Black man, but a Caucasian man somehow painted black.

It’s so bizarre, and so difficult to rationalize. Because was it really so difficult to find a genuine Black guy? No of course not, and given the extra time and effort involved in painting a Caucasian one then it must have been a deliberate choice. But if so, wouldn’t it have been far more logical and consistent to have also included a Black woman painted white? If not, then what is the “coloring” supposed to signify? And why, oh why, weren’t these blatantly obvious questions  asked by LG Cyon?

Very flawed concept and execution aside though, could the advertisement be construed as racist in any sense?

To answer, my first thought was to turn to Michael Hurt post’s about other Korean examples of the “Blackface” phenomenon at the Scribblings of the Metropolitician, and I broadly agree that the examples he gives are indeed offensive. Moreover, a huge multinational company like LG (of which Cyon is just the name of its mobile phone arm) would almost certainly be aware of the reception they would receive in Western markets, and as such cannot claim ignorance of their racist connotations and history, a parallel of which is Coreana’s use of Nazi imagery in a cosmetics commercial (see Brian in Jeollanam-do here and here for more on that). Nor do I accept the argument that images that Westerners would find problematic are automatically rendered acceptable simply by virtue or being made by and for Koreans, a culturally-relativist

argument that at the very least is highly patronizing to the latter.

But despite all that, my gut reaction to first offenses is to give the various Korean institutions, companies, and/or individuals behind them the benefit of the doubt, and to use them as an opportunity for education. In particular, because Korean society almost completely lacks any sense of political correctness (which can be as refreshing as it is annoying), and as, for instance, the recent controversy over the use of icons of its former Japanese colonizers for Girls’ Generation’s new album cover (see here and here) demonstrate, or the choice of a comfort woman theme for a series of erotic photos, many Korean companies can display a shocking ignorance of what might offend just fellow Koreans, let alone foreigners. Moreover, considering that: until as late as 2006 Korean social-science textbooks stated that Korea was a homogeneous society and that this was a source of national strength (see #1 here); that a great deal of manifestations of supposedly Western culture in the music industry especially are mere imitations of domestic acts that have come before them, sans non-Koreans’ cultural baggage and angst; and finally that, in Japan at least there are:

…teenagers who used to dress up, and maybe still do, in a fashion known as Ganguro (ガングロ), which literally means “black-face.”

According to a Western video report on this phenomenon, this look does not come from people of African descent; instead, its origins are traceable to a Japanese comic’s donning of blackface in order to clown around in a loincloth in the guise of an aboriginal Australian. 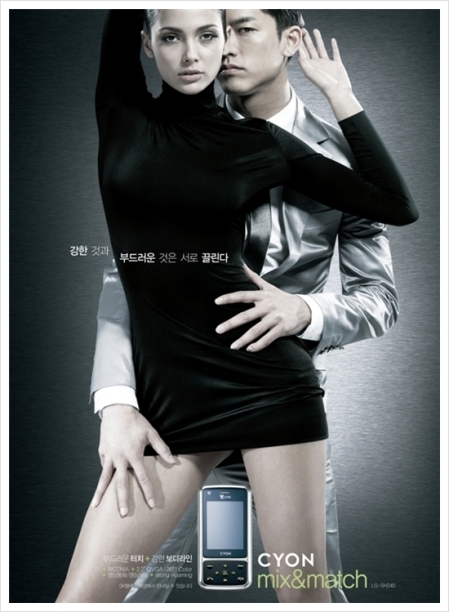 With influences on Korea also (again, see Michael’s post), then it’s almost surprising that offensive advertisements and so on don’t crop up more often, and perhaps demonstrate that Korean society is improving in this regard, albeit more slowly than surely (see below).

Also, while intent is not the only consideration in judging such an advertisement, it is still probably the most important, and accordingly I’m at a loss as to how the Cyon advertisements could be construed as a deliberate attempt to demean Black people somehow, regardless of how much offense it may or may not generate: indeed, if that was the intention, then it could certainly have been done much more directly.

That said, I’m reluctant to let Cyon completely off the hook. For take its advertisement from last year for the “mix&match SH-240” series of phones on the right for instance (source). In isolation, then they’re not bad at all (sex sells after all), but again, consistent and logical would have been alternative advertisements with a Caucasian man and a Korean women getting it on also, let alone Koreans with partners of other ethnicities, and I see such a lack as both very deliberate and emblematic of the Korean media’s issues with such relationships even in 2009 (see here, here, here, and here). But that’s another blog post, albeit one which I have to write very soon as part of my preparation for this conference in August!

Update, October 17) See here for another controversial example of “contemporary blackface,” this time from the French version of Vogue magazine.