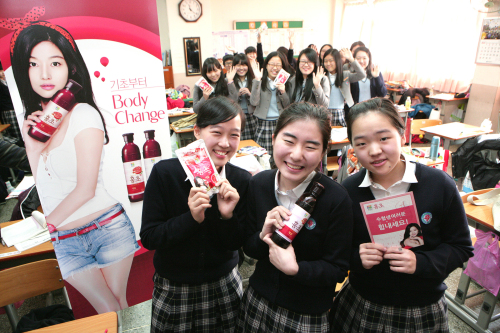 Young Korean women—not men—are the only demographic in the OECD that are getting more underweight than obese.

Call me making a mountain out of a molehill, but diet-drink companies being allowed to donate their product to teens, out of supposed concerns for their heath? And plastering their classrooms with ads of heavily photoshopped women in the process? Those may just have something to do with that:

On Sunday, Daesang’s brand Chung Jung Won [English website here] announced that to support 3rd year high school students about to take their university entrance exams, they would visit 20 high schools in Seoul before the 8th (the day of the exams) and donate 20,000 bottles of HongCho to students (source, right).

Chung Jung Won explained that this is an event for tired students that have been preparing for the exams for such a long time, so that they can be in good condition on the exam day. Also, that even after the exams, the company plans to continue supporting those students that have suffered so much, through various HongCho marketing events.

HongCho is a healthy vinegar drink that includes collagen, liquids extracted from the Oriental Raisin Tree, and a lot of fiber, and is very helpful for recovering from tiredness. (end.)

For sure, HongCho does sound quite healthy. And, technically, do not match the definition of a diet-drink:

However, a quick perusal of the Chung Jung Won website demonstrates that it is explicitly being marketed as a “body-changing” drink, with—especially after photoshopping—exceptionally tall and skinny Jun Ji-hyun (전지현) endorsing it most recently (that’s Kim Hee-sun/김희선 from 2010 above). Also, the following website screenshot (from 2011) and commercial show that the body-changing theme is no mere Konglish accident:

There also appears to be a sponsorship deal with the Diet War program:

Meanwhile, girl-group Kara (카라) are promoting the drink in Japan, with much the same theme. Which is ironic, considering that these are the same women who admitted that they can’t even drink water on the (frequent) days that they’re required to wear revealing clothing:

What do you think? Have any Korea-based readers had similar promotions at their own schools? How about overseas? Are concerns and issues different there? I know that in the US for instance, it is more sodas that are considered a problem, and that if students drank HongCho instead that would probably be considered a blessing. From TIME back in March (my emphasis):

If some public-health advocates have their way, sodas could become the cigarettes of food. Doctors already dislike the sugary drinks for their teeth-dissolving properties and for the role they may play in childhood obesity. There’s a constant struggle to get soda vending machines out of public schools, with administrators often forced to choose between losing sponsorship money from big soda companies and dealing with overcaffeinated, less healthy kids. Given the sheer size of the American soda industry—9.4 billion cases of soft drinks were sold in the U.S. in 2009—it’s not a war that will end anytime soon. Especially if a certain C word starts getting thrown around.

Update: From the picture, I got the impression that is was only girls’ schools that were targeted, but technically the advertorial (I can’t bring myself to call it a news report) only mentions 20 unnamed schools, and is repeated verbatim across newspapers.

Update 2: It’s not really related to the original post, but if you read that TIME magazine article above, you may also be interested in the recent findings that one of the main reasons for US children’s obesity is that they’re eating away from home so often, and (of course) that they’re mostly eating junk food when they do.

Remember when the Korean Defense Ministry said it was considering playing girl-groups’ music videos on giant TV screens along the DMZ?

The rationale, according to the official that thought of it, was that “the revealing outfits worn by the performers and their provocative dances could have a considerable impact on North Korean soldiers.”

Alas, nothing came of the idea. But the irony was palpable: in the 1970s, such revealing outfits were deemed subversive by the military government, with ruler-bearing policemen stopping women on the street to measure the length of their skirts (they would also cut men’s hair if it was too long).

It’s disappointing that it was set in the UK though, which never had such ‘fashion-police.’ Why not pick from the wealth of Korean video and imagery from that period? (Just look under “미니스커트 다속” for instance, literally “miniskirt control/supervision/clampdown.”)

My first thought was because the ad is already doing some subtle fashion-policing, through informing the Korean public of the new de facto rules. That would be much less subtle with authentic Korean examples though, and the ensuing social message, however refreshing, would be at odds with the cheerful tone of this one.

On the other hand, we can make allowances for creative license; perhaps the advertisers just wanted a swinging ’60s vibe. Also, it’s not like Koreans themselves aren’t afraid to poke fun at their old, ridiculous laws on miniskirt length (not least because they weren’t removed from the books until as recently as 2006), nor critique modern fashion and body-image ideals.

Still, it is yet another example of a phone literally embodying a woman. As is LG’s recent LTE wireless ad, which isn’t subtle at all:

On the left, the black text reads “If it’s only the shape/appearance of LTE, then it isn’t available everywhere,” while on the right the pink reads “If it’s really LTE, then it’s available in every city.” The headline in the middle reads “But it’s different,” and finally the text at the bottom reads “The one and only LTE, in touch in every city nationwide. Automatic roaming in 220 countries worldwide.”

Personally, I think the execution is flawed—if the woman on the left is supposed to only have the shape and/or appearance of the real LTE (confusedly, “모양” means both), then shouldn’t both women actually look and be clothed exactly the same, with some indication that they’re different for some other reason (say, by having the women on the left scowling)?

Either way, the advertisement’s other message is that the woman on the right, with high-heels, a V-line face, impossibly-long (and uneven!) photoshopped legs, and a dress that only just covers her underwear, is quite literally the modern standard that all agasshis (young women) should adhere to. Jun Ji-hyun’s bobbies would be proud.