In fashion-crazy South Korea, so many young women refuse to trade their high heels for flip-flops at [Haeundae] beach that green Astroturf runways are installed so they won’t wobble and fall…

…[Kim Na-young, a 23-year-old fashionista in skyscraper spiked heels] “They’re a little uncomfortable,” she said. “But they make you look taller in your swimsuit.”

Like most overseas news about Korea, that’s surely an exaggeration: I jog along nearby Gwangalli Beach several times a week, but rarely see any women wearing high-heels on the sand itself, let alone while in a swimsuit. But I guess at least Kim Na-young does, and I’m curious as to how she came to believe that she had to dress – and presumably diet – like a model 24/7 in order to be attractive.

“It’s all diet advertisements’ fault!” I’m sure you expect to me to say, and indeed I do think they play a huge role. But not all of them are created equal, with Post’s latest ones for Light up (라이트업) cereal being especially egregious. For not only do they promote the idea that being tall and ultra-skinny is the only attractive body shape for women, but also that having one is absolutely necessary for one’s career:

Most of that is self-explanatory, but let me add the dialogue for completeness’s sake (note that it’s normal to address someone by their position in Korean workplaces):

Voiceover: 방심했었다면, light up! 통쌀로 칼로리는…Light 다이어트는 up! If you’ve been inattentive about your body, light up! Made with unpeeled rice, light up has few calories…light diet up!

To play Devil’s advocate, being attractive is always going to help one’s career, but that’s just about the only defense that can be made of this ad. In particular, note the women it (and others in the series) present as unattractive:

In the ad in the top left and bottom right, supposedly the unnamed model is much too fat to consider wearing a bikini, as is the woman in the background in the bottom left. And as for Kim Sa-rang, the entire ad concept relies on her being unattractive at the top right, but transformed after eating the cereal into what you see in the bottom-left, despite the inconvenient fact that she (presumably) had exactly the same body in both shots.

Other problems with the ad include the confusing insertion of a fox’s tail on the Department head (as far as I know, foxes have a female image in Korean culture), and how he’s portrayed as such a, well, complete dickhead. This is further stressed in a slightly longer version of the ad:

Department head (from where the original version ends):

Light Up! 자신있게 권해 드립니다! I strongly recommend you Light up!

On a final note though, I should mention that of course is it not only the Korean media that promotes the notion that only tall and skinny is attractive. Indeed, in fact the very first thing the ad reminded me of was a New Zealand Listener review of the forgettable 1996 movie The Truth About Cats and Dogs, which pointed out that only in Hollywood would Janeane Garofalo ever be considered homely and unattractive (and which the whole movie was based on). 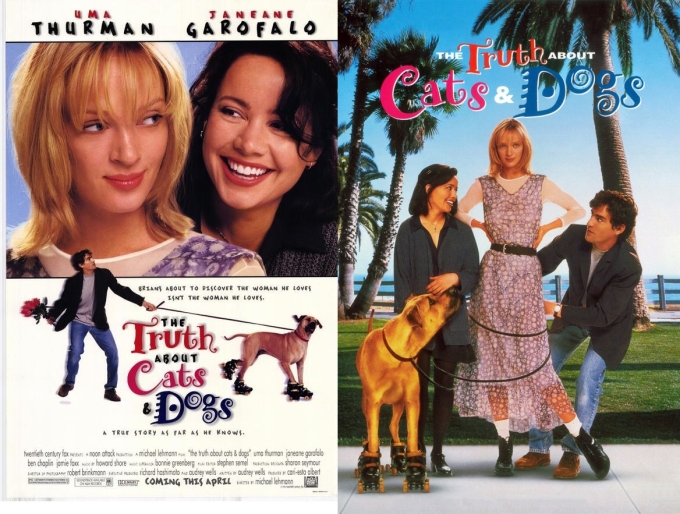 For the (more predictable) second thing the ad reminded me of, please see here!