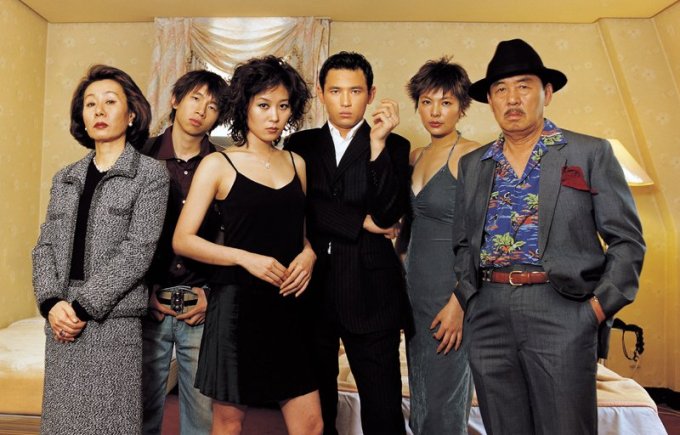 Heavily marketed on the basis of its explicit sexual content, and with probably no longer than 10 minutes between one sex scene and the next, on the surface it is simply pornography masquerading as art-house cinema. Or so I thought when I first saw it at the cinema in August 2003, my – let’s be honest – appreciation of Moon So-ri’s (문소리) nude body tempered by the knowledge that the object of her affections was Bong Tae-gyu (봉태규), then regularly appearing in numerous childish and annoying television commercials. Hardly lacking for access to pornography, I saw no reason to watch it again in the next 6 years.

But the movie was my first introduction to Hwang Jung-min (황정민), whom after seeing his transformation into a bumbling, possibly slightly mentally-handicapped idiot in You Are My Sunshine (너는 내 운명; 2005) a little later, instantly became one of my favorite actors. And then seeing So-ri’s brief but stellar performance in Peppermint Candy (박하사탕; 2000) last week too, I thought I’d give it another chance. After all, my tastes are a little more mature and more discerning now, and far from being put off by depictions of relationships between 30-something women and (often) childish younger men, if all goes to plan I’ll be formally writing a dissertation on precisely that by next March.

Watching it (again) myself over several nights originally then, I was very surprised at how much I liked it this time, and how much of the plot I’d either overlooked or simply gotten completely wrong 6 years ago. Struggling to determine why my opinion had changed so dramatically on a second viewing, I decided to watch it with my wife to see if she liked it also, and more importantly why. Unfortunately, she too thought it was largely pornography masquerading as art-house cinema(!), but she did at least confirm what I’d relearned about the plot. And watching her reactions out of the corner of my eye while ironing shirts (as one does when seeing a highly pornographic movie for the third time), finally it came to me. 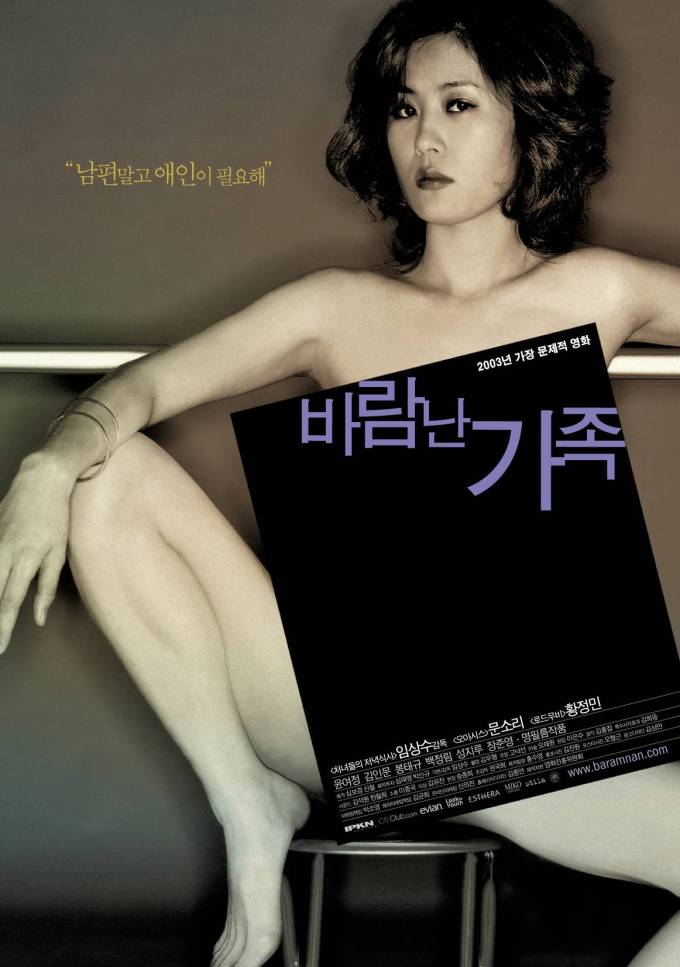 The first thing of note is that its English title is an extremely poor choice. Although it’s true that So-ri’s sexual frustrations with lawyer-husband Jung-min are the catalyst for her having an affair with her teenage neighbor (not actually consummated until close to the end, but – rather than maintaining the suspense – the DVD introduction helpfully shows that scene!), she is by no means a “society wife” smiling inanely at his shoulder at numerous dinner parties and so forth; in fact, she literally has no involvement in his working life and relationships whatsoever. There’s no evidence to suggest that she “gave up her dancing career in order to be a good lawyer’s wife” either, despite what the appalling Wikipedia article on the movie suggests, and one suspects that – like many English-speaking viewers – the writer was misled by the title.

Instead, a much better translation of “바람난 가족” would have been “A Family Having Affairs,” and accordingly it is quickly revealed in the first few minutes that with the exception of Jung-min’s dying father (competently played by Kim In-moon {김인문}) all main adult characters are or will have illicit sexual relationships: Jung-min a long-standing one with Baek Jeong-rim (백정림), a very complex character difficult to get to grips with in just one sitting; his mother Yoon Yeo-jeong (윤여정) with a minor character; and of course So-ri with Tae-gyu. And therein lies the source(s) of the continual sex scenes, which apparently attracted Korean viewers in droves (it was #1 at the box office).

But what, amongst all the sex, were the other points of this movie? What, indeed, was its “moral,” which – as I stressed in my last review – I believe a movie has to have in order to be worthwhile?

Well, without wanting to give any of the plot away, by virtue of all the affairs this is clearly a family with problems (even an adopted son is aware that Jung-min is lying when he says he’s working late). Jung-min’s reasons for his are unfortunately never elaborated, but his mother’s are: like Moon So-ri, she was sexually frustrated.

And how, in a marriage, might one become so? 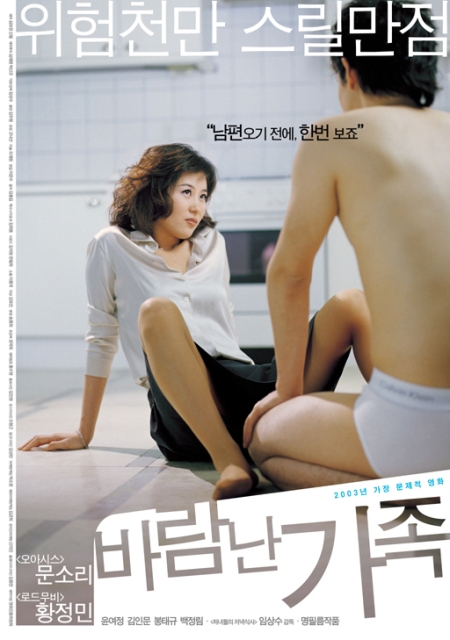 Well, while I’m not naive or intellectually shallow enough to attribute all married couples’ sexual problems to a lack of communication, nor arguing that communicating with one’s spouse (or partner for that matter) automatically solves them, I would wager that – if you’ll forgive the pun – a lack of communication is at the root of the vast majority of them. But whereas So-ri may not have been able to resolve her own sexual frustration with Jung-min given that he was already secretly having an affair, tellingly she doesn’t even try. Instead, as one would expect from a fucked-up family, she seems to have her heart set on fucking Tae-gyu literally the morning after Jung-min fails to satisfy her (the poster on the right is rather misleading).

Granted, to a large extent I’d simply be projecting in seeing meaning in that. After all, after 9 years together as a couple (5 married), my wife and I have naturally had our own sexual issues, especially after the birth of 2 children, but – with the knowledge that not doing so would have grave consequences for our marriage – all happily resolved by simply discussing things. Hence, despite all the attention on them, I do personally see all the affairs and the sex in the movie as natural consequences of and/or metaphors  for something deeper. As I think was the deliberate intention of director Im Sang-soo (임상수).

For instance, as Darcy Paquet in his excellent review at Koreanfilm.org points out, this is not the first time he has presented frank sexuality and nonconformist heroes in his movies. And in particular, bear in mind that with: the longest working hours in the world (albeit many of which are not actually spent working); the lowest women’s workforce participation rate in the OECD; and prostitution accounting for 4.1% of GDP also, then as this Japanese author (and personal experience) suggests, there are a lot of virtually sexless marriages in this part of the world.

Ergo, there may be more to the popularity of this movie than mere voyeurism, particularly as it was the enthusiastic response to finally having such frustrations articulated in popular culture in the mid-1990s that is what made movies like this possible in the first place.

True, I’ve yet to look for confirmation from Korean-language sources of that (watch this space). But as a response to potential accusations of overanalysis and projection then, let me offer this challenge: at the behest of their relatives and descendants, Jung-min’s main legal case in the movie – presented in the very first scene in fact – involves the unearthing of victims of an atrocity, which presumably took place during the Korean War or just before. There are also references to Jung-min’s own extended family being separated by the Korean War. While I have yet to come across any reviewer that interprets the former as any more than merely establishing his character as a lawyer though, and hence easily interchangeable with any other legal case, what purpose could both serve other than as metaphors for the broken family at the heart of this movie?

Likewise, gratuitous sex  is not what this movie is all about. And so compelling are all main characters’ stories, that despite yourself you may be wishing that one or two sex scenes had been removed in favor of further character development by the end of the movie. Indeed, the only criticism of the movie I have personally is that even after 3 viewings, Jung-min’s motivations for his affairs remain a frustrating enigma. 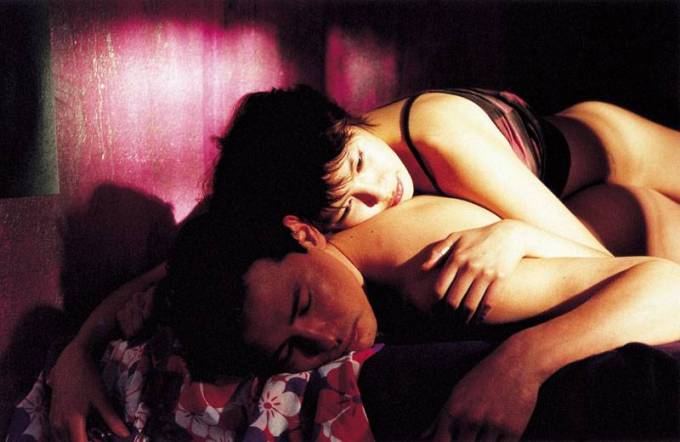