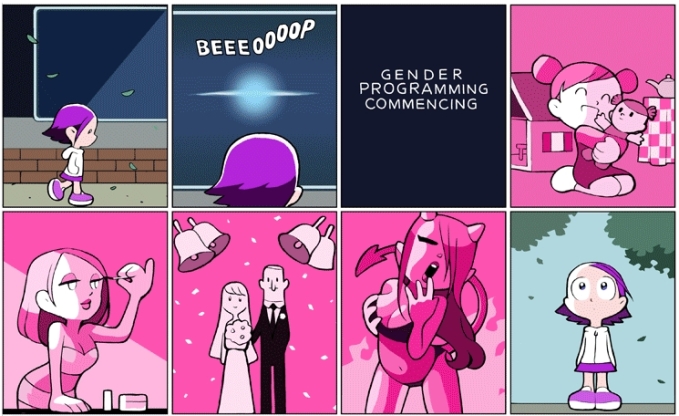 (“Gender Programming” by Sinfest. Click on the image for the full strip)

The new, lite version. Sorry if anyone relied on the categories in the previous version, but 1) they were always pretty loose and arbitrary anyway (many stories could go into several), and 2) they didn’t really seem appropriate with me deliberately going for a good mix of subjects now, rather than simply collecting every story I came across. Grouping them into five at a time does make for easy mental navigation though (i.e., see what’s available for one day, move on to the next), and if you’re impatient it only takes about a minute (yes — I’ve timed!) to read the titles of all the thirty-five links available.

— Gay in Korea: an interview with an American expat living in Seoul (Mapping Words)

— The problematic social norms of “I Got a Boy” (My Musings)

— Another Friend, Another Divorce in China (Speaking of China)

— Kodansha is figuring out that using the kid in the nude photoshoot with Kasai Tomomi was a bad idea (Asian Junkie; NSFW?)

— Do men really have higher sex drives than women? (io9)

— Life in Plastic: Fantastic? (Outside Seoul)

— South Korean animation: is the underdog finally having its day? (The Guardian)

— Will Hosting the Special Olympics Change Koreans’ Views on the Disabled? (Korea Realtime)

— Sean Hayes in the Christian Science Monitor on Korean Adoptions (The Korean Law Blog; The Hankyoreh)

— Go Young Wook to Be Indicted for Sexually Harassing Minors (Omona They Didn’t!)

— “Here are the best [Asian-American] responses to ‘Paper Tigers,’ in my opinion” (Phenomenology/Intervention)