Oops, I haven’t written in a while. Time to find something about body-image, the media, or popular culture to complain about then.

Seriously(?) though, there’s only so many times you can mention that young Korean women are chronically underweight, and the likely reasons for that. Better to highlight groups actually doing something about it instead.

One group is the Soongsil University Female Students’ Association, which recently encouraged women to stop excessive dieting by offering them free snacks, and passing on stickers and fans with messages like the one on the left above. It reads, “You’re different because you’re beautiful. Don’t feel bad or uncomfortable about your precious body based on other people’s stereotypes. Because you are you, you are beautiful. The 23rd Soongsil University Female Students’ Association: we are different, and we respect you.”

Those small efforts may seem futile in the face of the barrage of body-shaming messages women receive every day, but with three in five 19-24 year-old Korean women regularly skipping breakfast (nearly one in five, lunch and/or dinner too), then surely the growls in their stomachs at least got some questioning whether it was really worth it. As for the messages, body-image activist Minji Kim pointed out they’re surprisingly effective, and are now used by a number of organizations working on body-image issues:

“These messages create solidarity among people whose issues may have seemed daunting, because they were struggling alone. But when people share their stories and start talking about them? Then immediately they feel less lonely and empowered by knowing that there are other people like them out there and that they do have a support system.”

More specifically, Minji was talking about post-its like the one on the right, which reads “I would hate for you to lose even one gram in this world.” I’m unsure if it was placed there by the Soongsil students, by Korea Womenlink (remember their cool subway posters?), or if it was part of a collaborative effort, but the effect is the same! 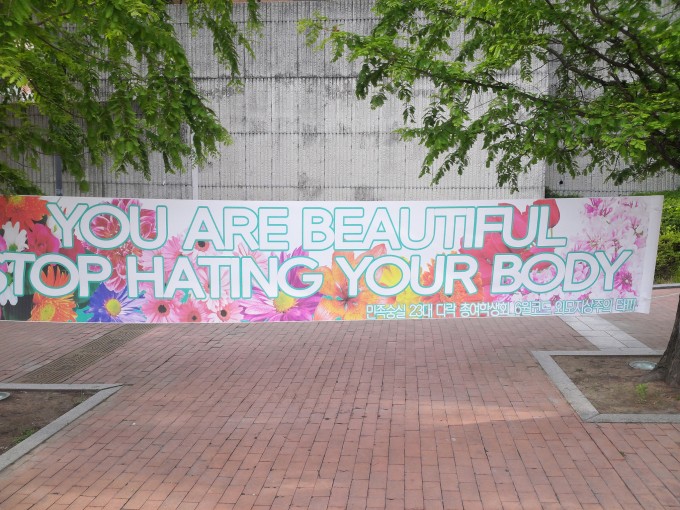 Hat tip to the The Rootless Metropolitician, who led me to the group via the above photo.