Watch how an innocuous video on vacations in history segues into admonitions against overspending:

2016 anchor: “In the 1970s the word ‘vacation’ was a buzzword, and many social issues associated with disorder, excessive prices, and overconsumption at vacationing spots occurred.” 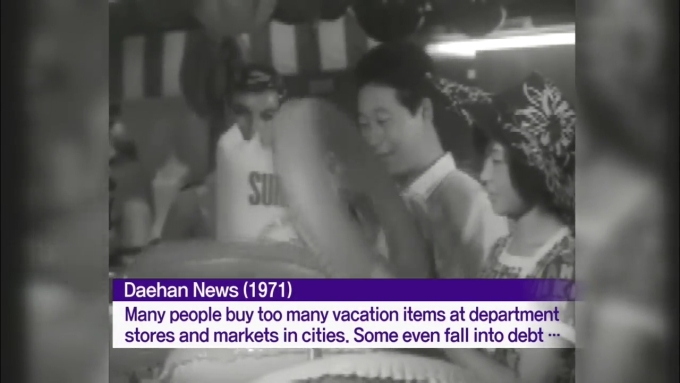 Look past the black and white, and many scenes from that segment look surprisingly modern. That’s what makes the original anchor’s warning so jarring. Who the hell buys so many beach balls, I wondered, that they get into debt?

In 1971, I’m sure Korean viewers were thinking the exact same thing. So, what on Earth had been the government’s motivation in producing that?

To answer, let’s be clear about what we’re actually discussing first. That Arirang report from August above is a translation of Korean news reports from a few weeks earlier, about 44 various videos, pictures, and documents on the theme of vacations just released by the National Archives of Korea (see here for a full list; opens PDF):

The segment we’re interested in is “To the Extent You Can Afford It” (분수에 맞는 피서를), originally shown on Daehan News (대한늬우스) on 16 August, 1971; see here for the full version, with much better picture quality.

“This hot summer, people are in the middle of having fun in the water. At city department stores and markets, many people are buying more leisure items than they need, as if they were competing with each other. Among them, some are enjoying themselves beyond their means, even getting into debt. Of course, people can’t be blamed for spending their own money which they earned themselves. Yet even so, isn’t overspending and getting loans something we should refrain from? It’ll be nice to enjoy the holiday with your family to the extent that you can afford. Let’s obey public rules and morals at swimming pools and leisure places. We should avoid speaking loudly while drunk, and behaving inappropriately. We should enjoy a bright summer to the extent we can each afford (end).”

Unfortunately, I’ve been unable to find any more information about the video online. But probably, that’s only because the first thing to take away from it is how normal it was for its time.

That’s partially because under President Park Chung-hee, accusations of personal enrichment could be used as a device to bring down political opponents and errant factory owners; as Mark Clifford explains in Troubled Tiger: Businessmen, Bureaucrats, and Generals in South Korea (1998), when “the system was at its heart corrupt, virtually everyone was vulnerable to punishment.” But primarily it was because, regardless of what one thinks of his means, Park was at heart a developmentalist, who firmly believed in the necessity of short-term sacrifice and capital accumulation for the sake of longer-term goals—and who regularly reminded the public of that in his speeches.

Writing in Measured Excess: Status, Gender, and Consumer Nationalism in South Korea (2000), Laura Nelson stresses how important it is “to recognize how widespread and pervasive the censure of the pursuit of enrichment was” back then. In particular:

“During South Korea’s lean years in Park’s early tenure, quotidian frugality was ideologically transformed into an act of popular patriotism….Park placed the burden of responsibility for the success of national development strategies on the shoulders of individuals in all their daily economic decisions.”

Nonetheless, in May 1970 the Health and Social Affairs Ministry issued a report arguing that income inequality was creating serious social problems. Yet more troublesome still, according to Joungwon Kim, author of Divided Korea: The Politics of Development, 1945-1972 (1976), was the simultaneous “conspicuous consumption of the new elite, who began building luxurious homes and riding through Seoul in expensive imported Cadillacs and Mercedes Benz.”

This was at a time when Koreans had only one car per 100 households.

And I want to offer yet more fruits from my hitting the books, to convey just how dire I learned the domestic economic and international geopolitical situation was for South Korea then, how tenuous the support for the government was, and just how vulnerable it felt politically. Because it’s reasonable to suppose that it only meant such admonitions became ever more fervent and extreme.

We were talking about a warning about buying too many beach balls, after all.

That would require thousands of words though, and probably most readers are already quite familiar with the circumstances leading up to the authoritarian Yushin Constitution of October 1972.

Instead, the promised insight of the title is how to make those feel more real and convincing.

Doing so is especially meaningful to me, because when I first learned about them as a student in the mid-1990s, it was before the Asian Financial Crisis. Tales of hardship in Korean history back then sounded somewhat abstract, or even hyperbole. Even when I learned much later that, in 1973, the Minister of Education praised prostitutes for securing much needed foreign exchange from USFK soldiers, Korea’s poverty failed to really sink in.“Hardship” isn’t what comes to mind when watching that video either, nor with that much–shared image of women’s fashions in 1971 that I opened this post with. Nor with this personal favorite too:

I mean, that pink dress, right? And that sweet smile? Could you look her in the eye, and tell her she couldn’t buy a second beach ball?

Ahem. But whatever the reasons such videos and images may or may not do it for you, the temptation to project a familiar, nostalgic Western image of the abundance of the ’60s onto Korea can be quite a powerful one. Perhaps even for Korean readers too, as it may be sufficiently distant that Korean popular culture now glamorizes that era.

That’s probably why it took cold, hard statistics to break the spell for me. Because at the time of that video, which looks so modern, and despite a miraculous-sounding average GDP growth rate of 10% between 1963-1970, still less than 1 in 10 Koreans had washing machines, refrigerators, phones, or televisions:

Those figures are sobering, and beg further questions about to what extent such videos served as both warning and propaganda. Even the women’s bikinis and swimsuits need to be considered in that regard, as again, they seem so modern—certainly no more or less modest than those of today—and may represent genuine permissiveness back then. Or, they may have been a deliberate, photogenic exception in an era when women-only swimming pools were deemed necessary in some places.

But let’s reserve answering those questions for the comments, and/or anything else raised here. Let me conclude instead with another quote from Laura Nelson, as she gives a much better sense than I could of how important the era is for understanding the negative, consumption-based stereotypes of Korean women that would come later. For remember those individuals, whose shoulders “the burden of responsibility for the success of national development strategies” would be placed upon? Ultimately, most of them would prove to be women:

…the image of the housewife as the archetypal consumer…begins to equate women as consumers and women as housewives, and is also part of the process by whereby men’s consumer practices become invisible. Moreover, the kind of consumption that women conduct as “housewives”…is a special case of consumption: women-as-housewives-as-consumers assume a responsibility for a collective interest….The dominance of the image of women-housewives-consumers foregrounds, for women consumers in particular, a moral distinction between responsible consumption and personal indulgence.

This leads to a consideration of the second gendered aspect of consumption: the danger…

And don’t forget precedents in the 1930s either!