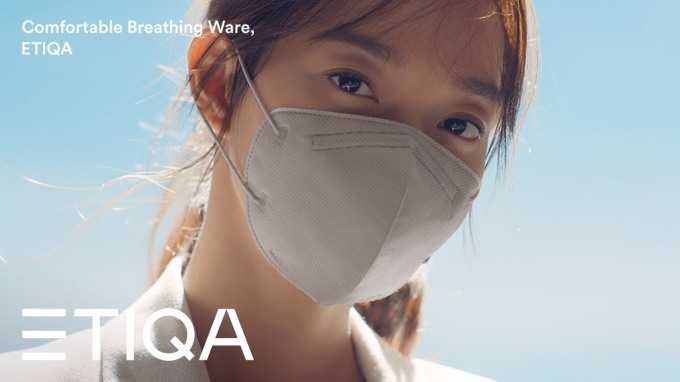 It’s become routine these days, trite even, to point out the many ways we are now living in the dystopias of once only imagined futures. So, when Shin Min-a’s endorsement of ETIQA dust masks came out back in February, reminding consumers there was no reason you couldn’t also look fashionable while trying to survive the climate apocalypse, I bit my tongue at the obvious resemblance to a spoof commercial from the Robocop 2 (1990) movie. Ten months later though? Again there’s much talk of fashionable ETIQA dust masks in the wake of the blinding, choking, toxic dust storms raging across the peninsula, yet a certain cyborg remains notable only for his absence. It seems this aging Generation X-er may in fact have been the only one to have made the connection.

Specifically, it was the Sunblock 5000 commercial that instantly came to mind. Because no need for the loss of the ozone layer to spoil getting that perfect tan, right?

And, with a nostalgic wink to fellow Gen X-ers, here it is in a compilation of some other spoof commercials from the first and second movie to give it some context:

In reality, without the ozone layer we’d all soon be dead; like much about the original movies (e.g., did you know the first was accidentally set in 2043?), with slightly more thought put into the commercial—as in having the voice-over claiming there was still slightly more than none of the ozone layer remaining—it would have been much more plausible. But at least, way back when I was 14, it did instill in me the first inklings of the sense that we were fiddling while Rome burned. And indeed, 30 years later, now we have a very real commercial that is in much in the same spirit.

What impact will this one have?