According to HanCinema, it’s a documentary about a Cuban man who falls in love with a Korean woman 10 years his senior. Unfortunately there’s little information available about it in English, but it does looks interesting.

Roboseyo discusses actor and singer Hyun Bin’s (현빈) decision to join the marines for his 24 months of compulsory military service, unlike most entertainers who prefer comfortable military PR-type positions.

But celebrities aside, Korea has 250,000 ordinary men conscripted each year, and this has a profound effect on Korean life. For more on that, see here, here, and here. 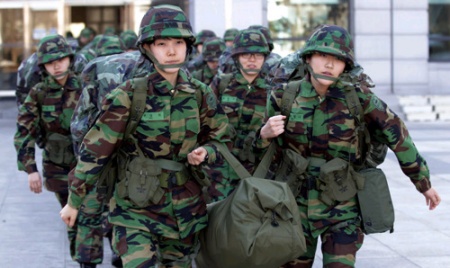 Like it says, its just a picture (source), but one commenter over at ROK Drop raised some interesting points about it:

ROK women in the military? Big deal. FYI, they’ve been serving alongside their male counterparts ever since 1948. The embarrassingly unjustified attention these Sookdae chicks are getting just b/c they’re in the first women’s ROTC outfit is disgraceful. Korean women have been getting commissions through OCS since the Korean War, the ROK service academies since 1998, and are serving in all ranks and branches (excluding Armor, Artillery and ADA) for decades. (Also, the reason they look so cute in their BDU’s is b/c the Gender Equality Ministry many years ago forced the Defense Ministry to provide tailored utilities specifically cut for women — e.g., female BDU pants have a more flattering cut around the hips, and micro-sizes they offer are small enough to qualify for junior misses or girls’ sizes back in the U.S.)

I disagree about some of the details about that last: the uniforms for women were only first tested last September (and won’t be fully introduced until July), and there’s no evidence to suggest that the Ministry of Gender Equality and Family Affairs (여성가족부) was originally behind the decision (see #2 here).

But although less then 1% of Korean soldiers are women, I have no reason to doubt that they’ve been serving for over 60 years, so the commenter is right to query the attention. And recall that The Chosun Ilbo is notorious for finding literally any excuse to post pictures of women and girls!

6) CEO of entertainment agency charged for sexually harassing a trainee

For the details, see allkpop, and see here and here for some context. Meanwhile, in other crime-related stories, Korea Beat reports that a serial child-molester was let off lightly by a judge for quitting his teaching job. And on the plus-side, albeit prompted by a tragic event, Global Voices passes on the news that:

A posting by the mother of the victim has mobilized net users to file an online petition and drawn media attention to a questionable murder case. The mother claimed her daughter was beaten to death while resisting being raped. The police has decided to reinvestigate the case.

7) Who are all these White chicks?

8) Who are all these fat chicks?

And in turn, Hot Yellow Fellows does to my own on the “Piggy Dolls”  (피기돌스). Whom, in addition to everything else, now netizens are also calling too old-looking.

I’ll let SeoulBeats summarize this one (The Marmot’s Hole also has a little on it):

Netizens have been in an uproar over a Japanese internet manga, created by otakus, which fetishizes a rather unflattering side of the Hallyu Wave that has recently invaded Japan.

The story is told by a fictional former Korean pop idol, working as a hostess, who gives an expose about the “real” inner workings of the K-pop industry to a journalist. The comic presents the Korean entertainment industry as extremely manipulative and seedy in which female idols are forced to give sexual favors to their bosses and their coworkers for fame. In the comic both SNSD and KARA are accused of performing such favors.The manga features highly sexualized images of SNSD and KARA members performing their hit songs “Genie” and “Mister.” Poor KARA has even been drawn performing naked. 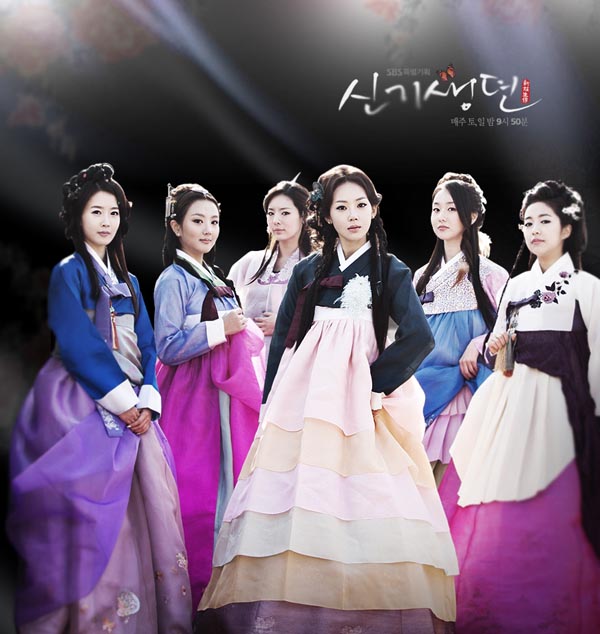 And for more on gisaeng (기생), the Korean equivalent of geisha, see here and here.