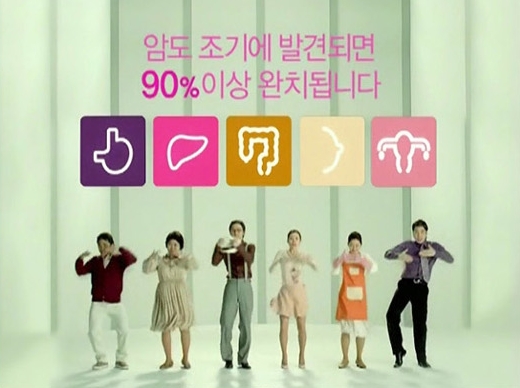 I may be wrong in assuming that public service announcements in Western countries still don’t feature stylized breasts and vaginas(?),  but regardless I love Korea’s no-nonsense attitudes to the body and bodily functions, in this case at least easily trumping any qualms that the Ministry for Health, Welfare and Family Affairs (보건복지가족부) may have had about featuring them in its campaign for people to get regularly checked for cancer.

What I really love though, is that it has been turned into the song and dance below:

Easily to laugh at perhaps, but are more serious but otherwise rather dull campaigns in Western countries really more effective?

Meanwhile, apologies to all those readers who were looking forward to my promised restarting of the Korean Gender Reader series in the new year,  but after much soul-searching this week – prompted by my catching a cold after writing the last two posts until the small hours – I’ve been forced to admit that I still don’t have the time. I may have next month if some anticipated changes are made to my job, but until then, please feel free to pass on and discuss any Korean gender, media and sexuality-related stories yourselves here!

Update – Seeing as we’re talking about Korean oddities, consider the following advertisement for a cosmetic surgery clinic here in Busan: 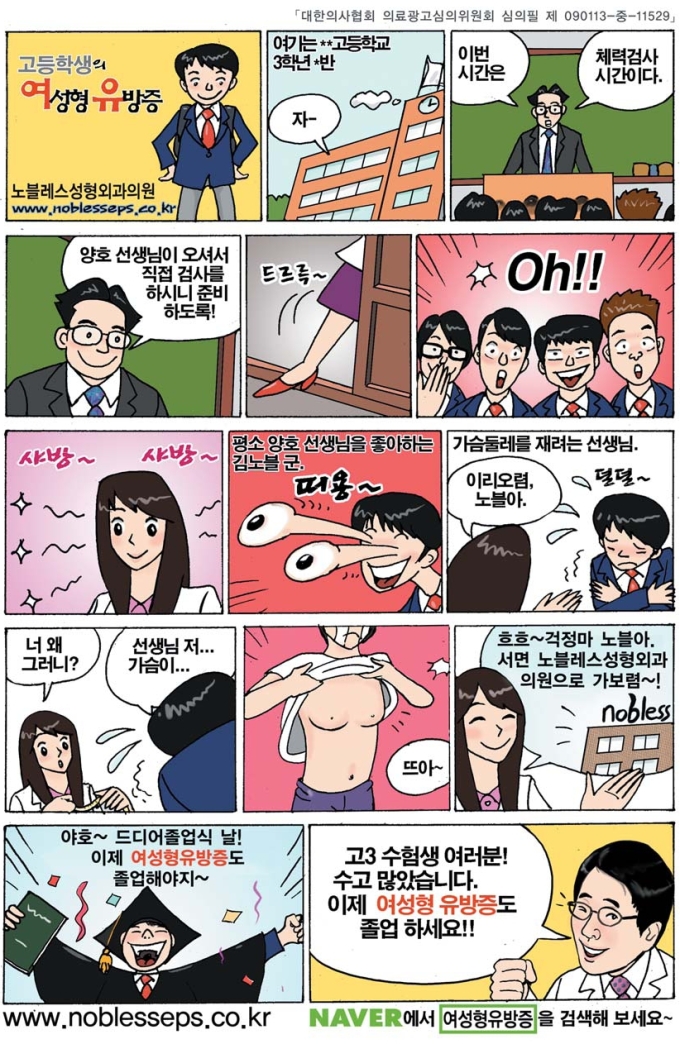 From page 18 of the 4th of January Busan edition of Focus newspaper – the entertainment section no less. And don’t get me wrong: with the proviso that Noblesse has a vested interest in fostering insecurities about one’s body image, I’d image that female-like breasts are no laughing matter for the high-school boys with the misfortune of having them.

It is also common for Korean cosmetic surgery clinics to use comics in their advertisements, one that readily comes to mind consisting of a group of people gaping in either awe, lust, or jealousy at a woman who has just received breast implants. You may have seen it on the Seoul subway:

Thanks to reader Marilyn for passing on the photo. And again it is unsophisticated perhaps, but regardless of one’s opinion of cosmetic surgery in general, it was probably effective: it got both Marilyn’s and my own attentions at least!

Granted that the Noblesse advertisement remains just plain bizarre though, albeit a little less so when you realize that the woman featured was either the school nurse or a visiting government health inspector, not simply a new teacher.

Finally, while we’re on the subject of cartoons, here’s one I couldn’t help smiling at a couple of days later (from Focus newspaper again):

In case you don’t get it, the young man is living with his older sister but has to find his own place. At first, he thinks the place the real estate agent shows him is too old for the rent being asked, but he changes his mind when he sees the view from his window. In the final panel, the real estate agent crumbles about how difficult his job is these days…

More problematic in Japan than in Korea perhaps, where I hear that voyeurism is so taken for granted that women can expect their underwear to be stolen if it is hung from the first or even the second floor, or is that just an exaggeration? Alternatively, is it a problem in Korea too?