Apropos of nothing more than my mellow mood this Sunday, two time-lapse videos of Tokyo by photographer Samuel Cockedey for you to enjoy.

And see Pink Tentacle for his latest entitled Floating Point, and the video and/or landscape links there for many more like them.

But it’s both curious and a pity though, that there are so many high quality landscape time-lapse videos of Tokyo out there, whereas I can’t find a single comparable one of Seoul. Why do you think that is? After all, clearly Seoul is equally germane: 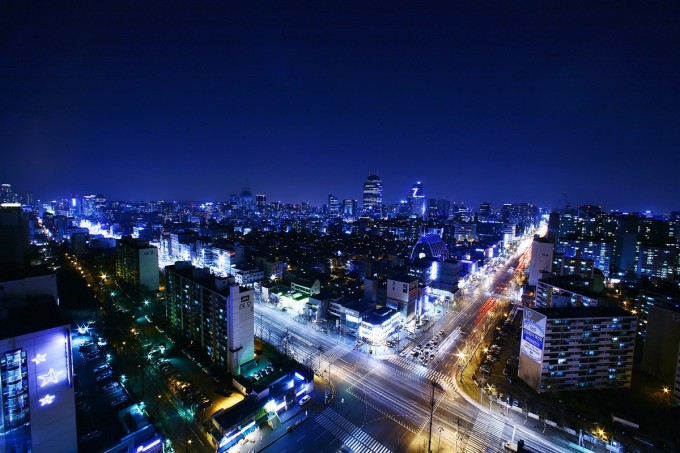 To help you ponder the attraction of Tokyo at least, here’s some quick thoughts from an old Wired article entitled “Is Japan Still The Future?“. Written in 2001, it seems just as – even more – relevant today:

…Even in the splatter of America’s own burst bubble, Japan’s bottomless reservoir of bad news seems too dark a model for all but the most dyspeptic futurist.

But there is another Japan: Japan-as-metaphor. This is the Japan that represents hypermodernism in all its dimensions, from advanced technology to individual alienation to urbanization run amok. This stylized notion took root in the ’80s amid the country’s economic boom. It was a time when Japanese business models, money, and products seemed like irresistible forces. Neuromancer launched cyberpunk onto the streets of a future Japan “where you couldn’t see the lights of Tokyo for the glare of the television sky, not even the towering hologram logo of the Fuji Electric Company.” William Gibson’s imagined Japan was not the shiny future-perfect of yesterday’s world fairs, but instead a hard-edged tomorrow where giant conglomerates ruled and silico-, nano-, and bio- were the main denominations of value. Gibson’s message was that disruptive technology would bring with it disruptive social change. And it read like prophecy.

And on a similar theme, check out “The Future Perfect” from TIME magazine also. Meanwhile, of course please do pass on any videos of Seoul if you’re aware of them, and if all that hasn’t already made you look at Korean urban life in a new light, then let me finish by passing on bhophoto’s Korean photos which will do precisely that!