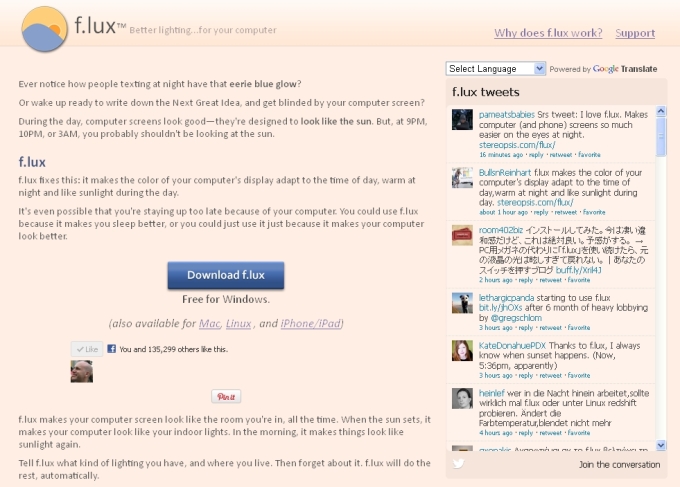 Rather than me decorate this post with some random Korean and/or gender-related image this week, let me pass on one of something far more useful: a screenshot of the webpage for f.lux, a small and easily-installable computer program which softens your computer screen’s brightness after sunset. Found via the comments thread to this article at io9, about how using computer screens — designed to be as bright as the sun — at night is screwing up our sleep, I’ve been using it for about 10 days now, and it’s already done wonders for my tired eyes at least.

p.p.s. If you have problems with the program dimming at the wrong time, like I did, go to your Control Panel and check you’re set to the right time zone, despite what you’ve set your computer’s clock to. Once I changed it, this also cleared up 5 years of frustrating, weirdly-timed emails for me!

— From the Archives: Embarrassing Moments with Chinese Characteristics (Speaking of China)

— Starbucks baristas writing “외국인” on your cup? (I’m No Picasso)

— Netizens dig up proof of ‘Laws of the Jungle’ being staged (Netizen Buzz; update)

— Is It Okay for Parents to Lie to Their Kids? China’s Parents Say Yes (The Atlantic)

— Dating Korean men according to Waygook (I’m No Picasso)

— The Hidden Meaning Behind Peeling an Apple (Geek in Heels)

— Idols revealed to be paid $2 USD/hr for ‘IAC’ attendance… is it worth the injuries? (Netizen Buzz; update)

— Growing Pains for North Korean Defector Teens: Some integration issues are cultural, others are just a fact of life (NK News.org)

— Govt: Hey, About Those Headlines on Youth Unemployment (Korea Realtime)

— Hallyu’s Appeal to Asia… No, The Other Asia (Seoulbeats)

— Review: Sistar19 – Gone Not Around Any Longer (Selective Hearing)

— You know what conscripts in general do, but do you know what it feels like? (Sorry, I was drunk)