If someone had told me years ago that I’d be writing about a Korean infomercial at some point, then I would have wagered good money that it would have been about one for bidets actually, for nothing quite gives you that “We’re not in Kansas anymore” feeling as switching the television on and seeing attractive women holding perspex buttocks over jets of water, waxing lyrical about how well they cleared a strategically placed brown-yellow paste. I could mention the looks of ecstasy and relief on various actors’ faces as they supposedly use the bidets later too…but you get the idea.

Lest I give the wrong impression though, there are certainly many advantages to Koreans’ no-nonsense attitudes to bodily functions, and actually I much prefer them to many Americans’ delicate sensibilities. But what to make of these – for want of a better term – electric breast enlargers?

If you can forgive the pun, then two things really stick out about this infomercial and its accompanying website for me (beware a loud video if you click on the latter):

First, needless to say, since writing this post on the subject a year ago I’ve still seen absolutely no evidence to suggest that doing fuck all is an effective way to lose weight and gain muscle tone and so on, let alone enlarge any specific body part. But while Korea by no means has a monopoly on misleading advertising, it is also true that various loopholes in advertising legislation here mean that there is little to stop producers of “diet-related” products from, well, basically completely lying about the efficacy of their products. For more on this, see the second half of this post where I discuss Minjeong Kim’s and Sharron Lennon’s “Content Analysis of Diet Advertisements: A Cross-National Comparison of Korean and U.S. Women’s Magazines” (Clothing and Textiles Research Journal, October 2006)¹ from which I first learned of it, and if it sounds like I’m exaggerating, then consider the fact that despite supposedly far stricter standards for “normal” food that over 88% of food labeled as organic isn’t, for instance, or that the KFDA is not empowered to tell you, say, which Vitamin C drinks contain carcinogens, but only (and uselessly) how many (see #14 here).

And second, in the strange event that you didn’t look closely enough to notice, then let me point out that it is only the Caucasian model above that you can see in lingerie, whereas her Korean counterparts are all fully clothed. True, that may sound like a strange way to describe a woman in a crop-top, but the difference is more than mere semantics, as many Korean porn stars worked as lingerie models before bans on foreign models working in Korea were lifted in the mid-1990s. This means that even today lingerie modeling still has a certain stigma that even bikini-modeling lacks, and despite the bikinis themselves obviously being just as (if not more) revealing. For more information, see #1 here for the most recent of many posts on that.

Still, Koreans are notoriously savvy consumers, so while I confess that I haven’t bothered to look at this late hour, I imagine that there will be many scathing reviews of this product available online. And, with obvious parallels in many other (more important) aspects of life in a democracy as young as Korea’s, to a certain extent this vibrancy of online Korean life is the result of and compensates for deficient legislation, although on the other hand in this particular case it is also stymieing the development of a healthy Korean consumer culture.

Tempting as it is to continue this post in that vein, let me wisely close here by pointing out that in the product’s defense, it can simply be returned with your money back before 2 weeks. And I seem to recall from my 2 viewings of Dragon: The Bruce Lee Story that actor Jason Scott Lee playing Bruce Lee had two similar things strapped to his pecs in a scene where he was working on a script at home (i.e. not exercising, just like the women in this infomercial). Can anybody enlighten me? Am I dismissing…er…electric shock treatment(?) unfairly? As far as I know though, and to many teenage girls’ chagrin, the size of a woman’s pectoral muscles still has little effect on the ultimate size and look of her breasts, which are mostly connective tissue, “lobules,” and fat.

(For all posts in my “Korean Sociological Image” series, see here)

1. On a technical note, since I wrote that post the PDF of the article is no longer free to download I’m afraid, so I would be grateful if anyone that knows of a free link an/or a copy themselves could pass it on for me to provide to others here. Alternatively, serendipitously my printer broke last week and I’m buying a printer/scanner to replace it, so I’ll be able to scan the copy I printed if anybody asks! 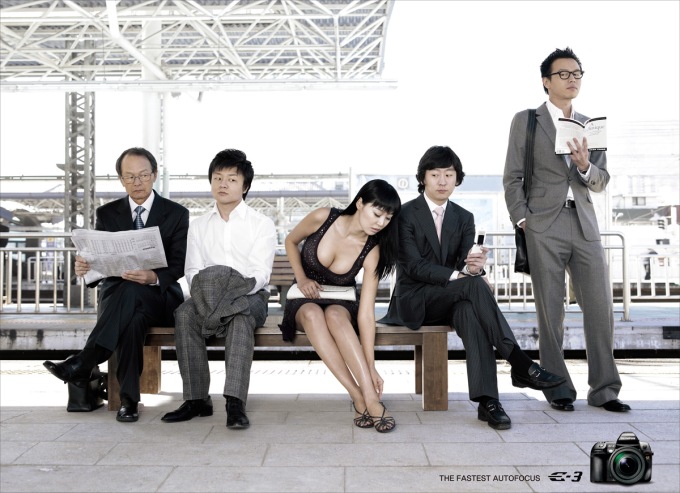 Given my Feminist pretensions, then usually I’d instinctively feel defensive about my decision to post an ad like this, and in the past this has often prompted me to write lengthy arguments about how, say, exposure of breasts per se shouldn’t be regarded as sexist. But with some notable exceptions (and from which I’ve learned a great deal from), whether through preaching to the converted, most of my readers being men(?), or some other reason, judging by the lack of detracting comments on those occasions then such justifications have probably proved unnecessary.

So, I’ll let it go: readers certainly don’t need me to spell out that on the one hand this ad is definitely objectifying, but on the other that men would behave exactly the same way even if women had achieved complete equality, and can decide for themselves if it’s sexist or not (I’m still happy to discuss that in the comments section though). In the meantime, I’m learning to feel less ashamed about the unabashed grins ads like this put on my face, especially the first ad in this post.

Actually, a much more interesting issue it raises is its directness. Of course objectifying women is hardly new or unique to Korean ads, but I can’t think of any other example that so blatantly incorporates the corresponding (sexual) male gaze into its message, and this makes it more sexual than, say, the sudden spate of couples kissing in Korean advertisements that is making news recently (see here, here, and here). On top of that, it actually went up way back in November 2007 too (see the details here), which raises some interesting questions:

If any readers can help me with any of those, I’d appreciate it. In the morning, and with apologies for not doing this first, I’ll scour Naver and so on and see if there’s anything in Korean on it.

Update: Unfortunately I couldn’t find anything at all about this ad in Korea, either at Naver or Yahoo! Korea, and which makes me wonder if it was actually released or not? But as for ads featuring the male gaze, I forgot about this one with Han Ye-seul (한예슬) for lingerie company Venus (비너스). From February 2008:

(For all posts in my “Creative Korean Advertising” series, see here)