Forget the TED Talks. Instead, use this 16-second commercial for a great introduction to Korean gender roles.

By Girls’ Generation’s for Shinhan Card, it’s completely innocuous at first viewing. Take a second and third look though, and it’s extraordinary in how much it reveals:

First, because of the obvious: those legs. Then, because my students barely seemed to notice them when I asked what they thought of the commercial, let alone considered objectifying only the women to be problematic. Probably, because they’re already used to ubiquitous female “assistants” (doumi;도우미) and scantily-clad “narrator models” (나레이터 머델) being used to sell and promote all manner of products, services, and causes. And girl-groups, effectively, are performing very much the same roles.

Also, that indifference was probably because Girls’ Generation are notorious for wearing hot pants or jeans that are several sizes too small. Indeed, entertainment companies deliberately emphasize girl-group members’ legs to make K-pop more sexually-appealing in conservative East Asian markets, where people generally share Koreans’ taboos about breast exposure. So, it may seem disingenuous to single out this commercial in that regard.

But I’m not—I’m singling it out for what the differences between the men and the women reveal. Because my students would surely have noticed more if the men had also been wearing short-shorts, with the well-muscled legs to pull them off. Or, with more male-specific revealing costumes that showed off their abs.

With just women doing silly dances in revealing clothes though? That’s so normal in advertising that most people don’t think twice about it. See what I mean by looking at these images from A Web Essay on the Male Gaze, Fashion Advertising, and the Pose below. What are your gut reactions to them?

(“Most viewers find the images of the men odd or laughable. But the images of the women seem charming and attractive…Why should it seem funny to see a picture of adult men striking a pose when the same pose seems normal or charming to us in pictures of adult women?”)

Obviously, this speaks to gender role portrayals in the media worldwide, not just that of Korea. But, with the latter’s tendency towards cuteness and aegyo, it does seem quite extreme here. And, as if to rub that in, in this particular commercial the text and the song also emphasize that the women are very much just for decoration:

“The card that unceasingly thinks about customer satisfaction”.

Then what the men are saying while that is visible: “생각, 생각, 생각, 생각”.

“How shall [the card] achieve everything [the customer] wishes?”.

(Source, above and below: Paranzui)

Then the men again, while the girls are do their leggy dance, then stand in a line with the men and supposedly sing along with them (but we only hear the men’s voices): “손잡고 힘을 모아 다 함께 생각 생각”.

“Let’s cooperate [with the customer] and collect our energy together and think about all that”.

Finally in the voiceover, with the men sitting in contemplative poses and the girls standing behind them clapping : “카드의 길을 생각하다”.

“What is a card’s purpose? Let’s think about that”.

“The card that can be used anywhere in order to increase customer satisfaction!”.

Easy to miss on a single viewing, it emerges that it is only the men that do the thinking in this commercial, and by default, for the bank also. Yes, really: even when they all say “How shall [the card] achieve everything [the customer] wishes?,” if you look closely at roughly 0:08 into the commercial when the girls actually finish saying that (see far above), they clearly turn to the men for an answer. Rest assured then, that if you invest your money in this bank, that it will be in the hands of smart people that will take your concerns very seriously. Those people just won’t be women, that’s all.

Exaggeration? Hardly. Consider the facts: according to a recent report in the Korea Times, there are no female CEOs in the entire financial industry here; there are only 2 women out of a total of 220 team managers in the Financial Supervisory Service (and no executives); there are no women with either position in the Bank of Korea. Moreover, one anonymous (male) government official in finance argued that this is somehow justified by “the country’s financial bureaucrats [having] been overwhelmed with too “serious tasks” to pay attention to gender equality” (as in ever since the early 1960’s, not just the recent crisis), and it’s telling that even Rep. Lee Sung-nam (이성남) of the Democratic Party, a woman and former worker at the FSS, feels that women’s weak point in finance is their “competitive edge.”

Granted, given that Korea has one of the lowest women’s workforce participation rates in the OECD, and that Korea has a surprisingly low “Gender Empowerment Measure” relative to its level of development, which is based on “factors such as the number of female legislators, the percentage of women in senior official and managerial positions, the percentage of women in professional and technical positions, and the income differential between men and women,” then it might seem unfair to single out the financial sector for criticism in this regard. But then if I’d wanted to highlight the lack of women there in particular, then I couldn’t have selected a better commercial to illustrate why that might be so.

Nor for explaining “function ranking” either, a common sexist motif in advertisements. A quick summary (source):

Activities can also be expressive and symbolic—who is shown doing what in the image? For example which gender is most likely to shown caring for children? Very commonly when persons in the image have functions, these functions are ranked, with the male carrying out the senior functions, the female the junior functions. Men act, and women help men act. Males are more likely to be shown in the executive or leadership role, with females in the supportive, assistant, or decorative accessory role.

That and other motifs were first outlined by the late sociologist Erving Goffman in his 1979 work Gender Advertisements, and which is still very much the framework by which sociologists study how gender roles are perpetuated in advertising. Let me leave you with one more observation from it (see the sidebar for many more examinations of Korean advertisements using his framework), then another example from Korean banking:

In our society where a man and a woman collaborate face to face in an undertaking, the man—it would seem—is likely to perform the executive role, providing only that one can be fashioned. This arrangement seems widely represented in advertisements, in part, no doubt, to facilitate interpretability at a glance (p.32).

As indeed is the case with this advertisement for a bank I came across last November: 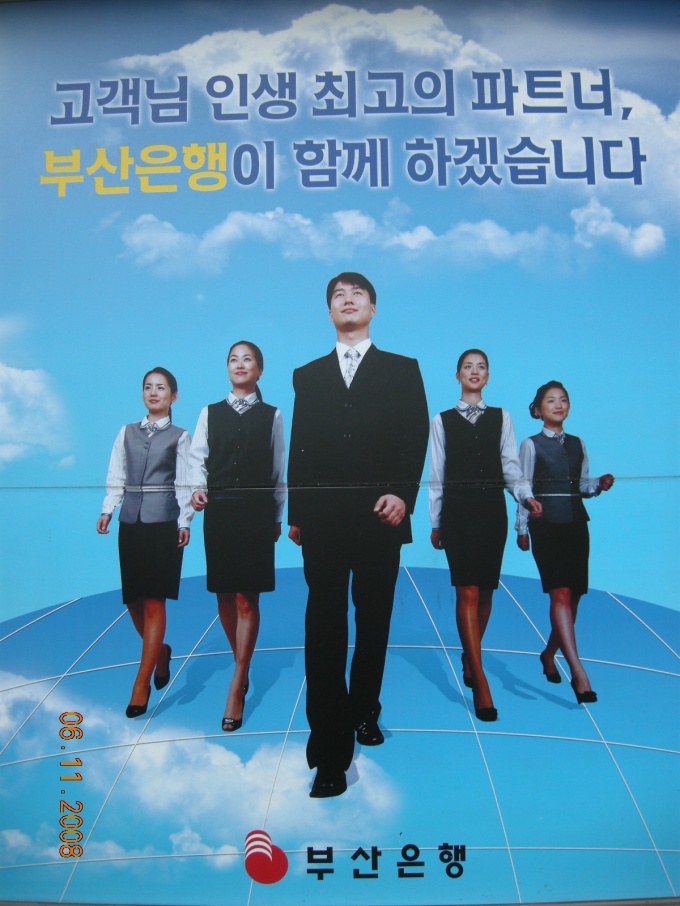 Technically, the man is a customer, the women clerks (the text reads: “The customer’s best life partner, with Busan bank”).  It is very telling though, how difficult it is to imagine an ad with the sexes reversed—let alone find an example in real life.

Update: For comparison, see here for a Shinhan Card commercial with just the men.

(For all posts in the “Korean Sociological Images” series, see here)

Activities can also be expressive and symbolic – who is shown doing what in the image? For example which gender is most likely to shown caring for children? Very commonly when persons in the image have functions, these functions are ranked, with the male carrying out the senior functions, the female the junior functions. Men act, and women help men act. Males are more likely to be shown in the executive or leadership role, with females in the supportive, assistant, or decorative accessory role.