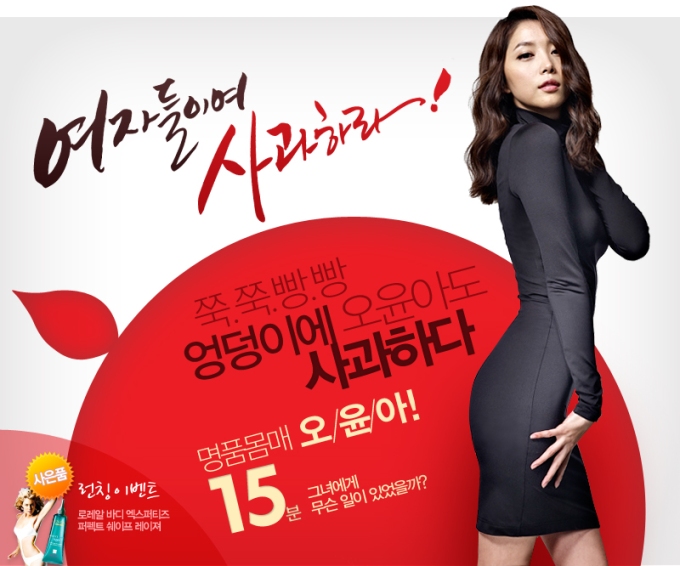 After all, even actress Oh Yoon-ah (오윤아) does. Or at least according to the black text in the advertisement above.

It also proclaims that her buttocks are worthy of being described as part of a “쭉쭉빵빵” figure, so presumably the logic is that she needs the product being advertised to maintain that figure, with apologies to her buttocks for having used different methods previously.

Yet that’s based on the assumption that, in Korea too, it is a legal requirement for endorsers of products to have already used or be using what they’re advertising. But perhaps that would be applying too much logic here:

Compelling viewing for sure. But then Applehip Korea is essentially arguing that sitting on your ass all day is all you need to get “apple hips” (애플힙) like those of the women above, so possibly the aim of the commercial is more to distract you from that non-sequitur?

To be more precise, at least two hours of sitting in the seat a day are necessary according to this Korean “news” article, preferably with three uses of the massage function. See here and here for instructions, and all yours for a mere 338,000 won (US$288)!

Of course, by no means is South Korea the only country in the world where essentially useless exercise equipment is sold, and the seat may well improve one’s posture. But as this Korean source (refreshingly) laments, while Korean women’s interest in their appearance is excessively high, their interest in exercise is very limited. Indeed the entire beauty, diet, and exercise industries here are predicated on a widespread belief that obtaining the perfect body is possible provided one merely buys and passively uses, applies or digests various products.

Lest that sound like exaggeration, see here and here for further examples and links to studies providing empirical evidence. And, unfortunately, because of a loophole in legislation regarding “health-related” products specifically, there is little to prevent Korean advertisers continuing to make such absurd claims of their products.

On a final note, did anyone else find having a guy standing with a sign saying “Women! Apologize to your bottoms!” a little creepy? How about several of them, standing on a street with placards and a shopping cart full of apples?

Update: Not really related — the buttock-dancing in the commercials is not as much of a jump for Korea as it may at first appear — but the commercials instantly reminded of these ones from Reebok that have created so much controversy in the US recently. For those of you unfamiliar with them, see the ensuing discussion here, here, and here.

20 thoughts on “Korean Sociological Image #25 – Women: Apologize to your Bottoms!”