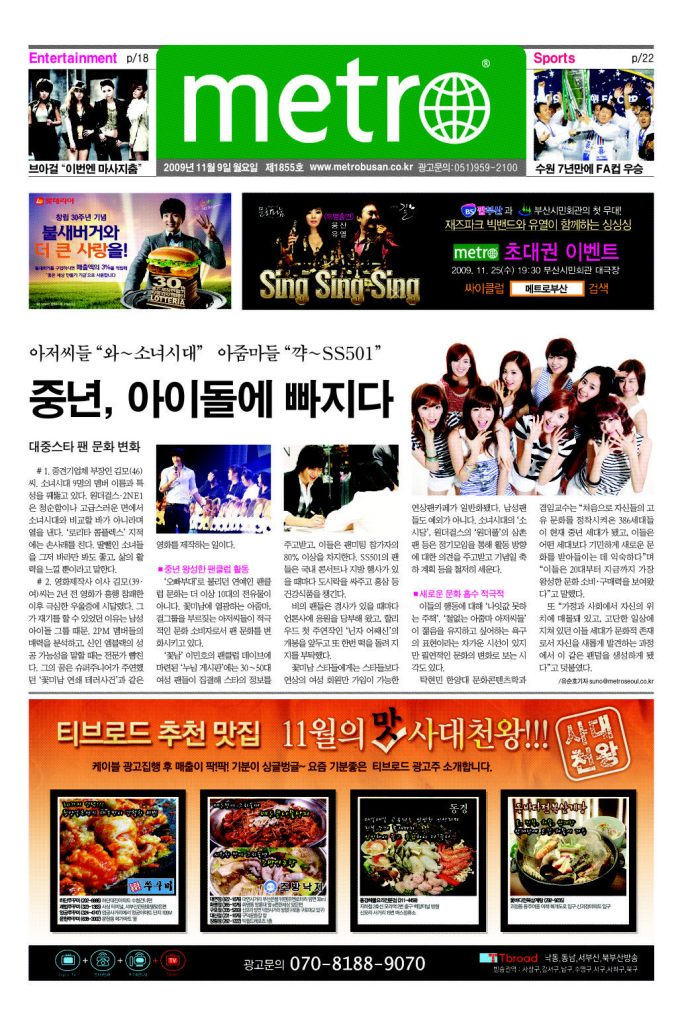 Update, September 2013: My original commentary on this article became outdated, so I’ve since removed it. Instead, please see here, here, here, and here for more on the controversial “uncle” or “ajosshi” fandom of teen girl-group members, and here for more on why middle-aged women came to dominate soccer fandom back in 2002 — an important precursor to their fandom of pop stars and actors described here.

Middle-aged People are Head Over Heels about Young Idols

#1. Mr. Kim (46), a department manager of a medium-sized business, knows the names and personalities of all 9 members of Girls’ Generation. He thinks that the Wondergirls and 2NE1 do not even come close in terms of purity and class. He dismisses accusations of having a Lolita complex, and says that watching the girls of Girls’ Generation, who are about the same age as his daughter, give him a feeling of life and vitality.

#2. Film company CEO Mrs. Kim (39), suffered severe depression after her movie did extremely badly 2 years ago. But she was able to recover because of her interest in male idol groups, and when she analyzes the charms of members of 2PM, or discusses the potential for the new group MBLAQ, she is indistinguishable from an expert in the music industry. Her dream is to make a movie like Attack on the Pin-up Boys (2007) that Super Junior starred in.

As the name implies, “older brother” fan club members used to be mainly teenagers, but this is no longer the case. But as active consumers of culture, middle-aged women passionate about flower men‘ and middle-aged men heavily into girl groups are actively changing fan culture.

For instance, on flower man Lee Min-ho’s fan club “Dave,” there is an “older sister” section for 30-50 year old women to exchange information about their star, and when there are fan meetings with him they make up over 80% of the audience. And whenever SS501 [James: if you don’t want to show your age, say “double-ess” rather than “ess-ess”!)] have a concert in Korea or attend some event in their region, their middle-aged female fans prepare packed lunches with healthy foods such as red ginseng for them.

And whenever there is an event featuring Rain, his middle-aged female fans call the media and request favorable coverage. Before the release of his first Hollywood movie Ninja Assassin (2009), they even delivered rice-cakes to them, a symbol of good luck for a new venture.

Indeed, it has become quite normal for there to be fan clubs that only allow those older than the flower men themselves to join. And this is true for male-only fan clubs for female idols too. In the Girls’ Generation’s “Girls’ Generation’s Party” and the Wondergirls’ “Wonderful” fan clubs for instance, middle-aged men have regular virtual meetings where they exchange opinions about how the groups can progress and thoroughly how they can celebrate group anniversaries and birthdays and so on.

Many people have dim views of middle-aged men and women who don’t act their age, dismissing them as merely chasing after their lost youth. But an alternate view is that this demographic shift in membership is an inevitable change.

Professor Tak Hyeon-min, on sabbatical in the Cultural Contents Department of Hanyang University, said “People of the 386 Generation, who have finally established their own unique culture, are used to actively absorbing new things,” and that “from their 20s until now, they have demonstrated that they are the biggest consumers and purchasers of cultural products.”

Also, “members of this generation are stuck with heavy family, home, and/or social responsibilities, so as a means of escapism and renewing themselves, they have created a middle-aged fandom in a sense, fundamentally changing Korean fan-club culture in the process.” (end)

21 thoughts on “Lusting After Teenagers…or the Maturing of Women’s Fan Culture?”