If you’d told me a week ago that I’d be spending much of my birthday looking for images of Korean men touching themselves, I’d probably have politely told you never to comment on my blog again.

Prompted by this analysis of Korean magazine advertisements that found that Korean men were significantly more likely to be shown doing so than Western men in them however, that’s precisely what I’ve been doing. But for all their supposed ubiquity, it’s proving surprisingly difficult to find examples, throwing off my schedule for the next posts in this series.

To be specific, I’m after advertisements like these, but featuring Korean men rather than women, and would really appreciate any help. Seriously, what search terms would you suggest, in English or Korean?^^

Of course I do have some examples, and will continue looking: my planned post will simply take longer than expected. In the meantime then, let me briefly offer some amusing and/or interesting advertisements that have cropped up recently instead, starting with that for Coca Cola Korea (한국 코카콜라) above featuring Thai-American Nichkhun (닉쿤) of the Korean band 2PM. I think its humor speaks for itself, but in the unlikely event that you feel I’m reading too much into it, please see those featuring other…er…members of the band here, of which Junho (준호) in particular seems to be enjoying holding his miniCoke bottle entirely too much!

Next is this one for Venus lingerie (비너스) featuring Han Ye-seul (한예슬), featured on the front page of Korea’s main portal site Naver (네이버) as I type this. Why it’s interesting is because of the English name “Glam Up” for the bra featured, which, making little sense otherwise, supports the argument that the English word “glamor” has somehow come to mean “voluptuous” or “curvaceous” in Korean: 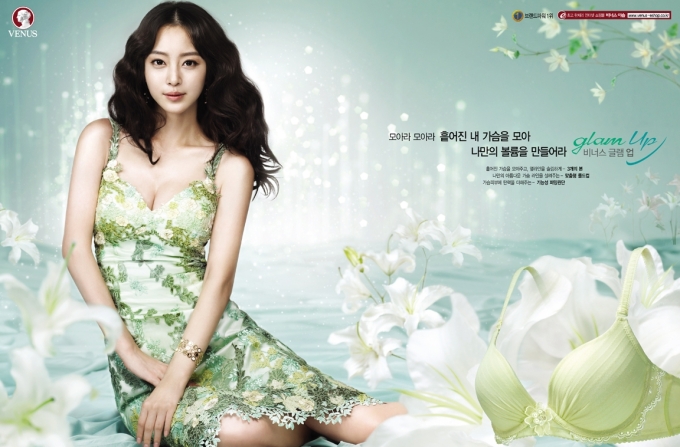 In turn, it demonstrates the ridiculousness of the new Korean phrase cheongsoon-gullaemor (청순글래머; or “innocent glamor”), but which is nevertheless very much in vogue in the Korean media at the moment. But that is no great surprise in view of the enduring popularity of older ones for women’s bodies like “S-line” (S라인) perhaps, and so, lest I begin to sound too serious here, let me move on to this advertisement for Nike Korea (나이키) featuring ice skater Kim Yu-na (김연아):

One of the most endearing athletes I’ve ever seen (well before she won her gold medal), it’s difficult not to simply adore Yuna, but I confess I still had to to laugh at what Matt at Gusts of Popular Feeling wrote about this ad last month:

By the way, does anyone find Kim’s expression in this ad to be, uh, ecstatic?

Perhaps there’s a reason the left hand side was cut off where it was. Just do it, indeed.

Okay, perhaps that was reading too much into it, and I’m sure you can understand my reluctance in not posting it earlier, the image of her at #10 here alone receiving thousands of hits in the last week of February, presumably most of them from fans…

Either way, I hope you at least one of those advertisements made you smile and/or think. And again, if anyone can help find examples of the sorts of advertisements I’m looking for, I would very much appreciate it; even if it’s only because you feel guilty for forgetting my birthday!^^

15 thoughts on ““Gender Advertisements” in the Korean Context: A Request”