CGI technology has brought the late Audrey Hepburn back to the screen, as she stars in a TV advertisement for the chocolate company, Galaxy. Hepburn’s sons, Sean Ferrer and Luca Dotti, said regarding the project: “Our mother often spoke about her love of chocolate and how it lifted her spirit, so we’re sure she would have been proud of her role as the face of Galaxy.”

It made the author a little queasy, and reminded her(?) of “Pat Metheny’s rant on ‘musical necrophilia,’” which is “the technique of overdubbing on the preexisting tracks of already dead performers.” For those more interested in the likely impact on entertainment and politics as the technology becomes more widely available though, I recommend the 2008 short story “Fenneman’s Mouth” available at the science-fiction podcast Escape Pod, which explores the making of a new Groucho Marx (1890-1977) movie, and then the rewriting of a senator’s comment on television.

While not too big on the action, it did get me thinking about the plausibility of the story. While I understand the concept of manufactured memories, I think that if we were aware of the technology that could alter videos to that advanced degree, it will spawn a contingent that will publicly question, research, and often discredit every video that is produced. It’s happening right now with still photographically, like when the blogosphere was quick to research and discredit Iran’s missile launch photos.

I love this story from a sci-fi and personal perspective….You’ve got a story where a group of people create a new piece of technology and use it originally for entertainment purposes, but during the course of the story the technology changes the face of politics as we know it…

Against that, Meercat commented that the technology was already very much in use:

Granted, we are led to believe the characters have improved the technology to the point that it appears real, but current real-life animation, sophisticated voice over, etc. does the same thing. These things have been used for several years to sell products, complete films and I would guess even fabricate more than a few factual accounts. A couple of years ago, a product, Coca-cola I think, had a series of advertisements featuring Bing Crosby and other dead celebrities. It was pretty rough, but the concept and execution is there.

Indeed, it is in this sense that one of the first links to this part of the world emerges. For according to Joe Joseph in The Japanese: Strange But Not Strangers (1993), print advertisements of dead celebrities were used there for many decades (pp.112-3; source, right): 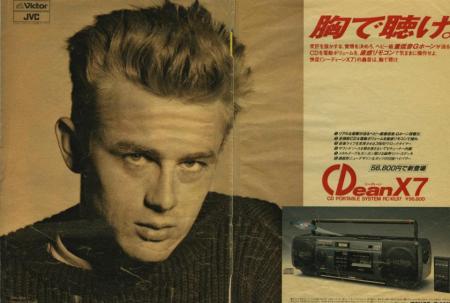 Japan first began hoovering up American film stars in the 1950s, a golden age when America stood for baseball, hamburgers, Hollywood, and everything else that a still poor Japan yearned for. Some of the starts from that golden age are still winking from commercials and hoardings across Japan, even though they died years ago. Irritatingly for the estates of these actors, Japanese law does not oblige Japanese firms to pay royalties for ‘portrait rights’ of dead stars. So James Dean promotes just about everything in Japan from hygienic rubber gloves to high-tech robots. He is infinitely obliging. You only have to ask and he will personally endorse your noodle restaurant or petrol station. Marilyn Monroe’s face also peers out of the unlikeliest posters in the unlikeliest places.

I would be grateful if any readers can tell me if that is still the case, and/or whether they were also used in Korea (I haven’t seen any in the last thirteen years here). Either way, the second link emerges in that given that Korea is a society not just lagging in implementing legislation on advertisers disclosing the use of Photoshop, but arguably one that positively embraces its use, then I fully expect Koreans to be at the forefront of using such technology in the future.

And soon. Recall how quick and easy it already is to do extensive digital manipulation of video — not just images — these days, as demonstrated in the following video (hat tip to maitretya). It takes no great leap to see how dead celebrities could be used instead of living actors:

And that video was from 2010, just after a similar technology was used for a Georgia coffee commercial (see here for a discussion and more examples):

But while there is definite cause for concern, especially given that the Korean media and advertisers already present physically-impossible, computer-generated body shapes for consumers to aspire to, I shouldn’t deny that there are also benefits to photo and video-manipulation, or that retouching has existed just as long as both technologies themselves. These considerations are well covered in the following short Off Book video (which in turn is further discussed at PetaPixel):

Accordingly, I’m more fascinated than left queasy by the Audrey Hepburn commercial, and particularly enthused by the similarities to an SF story I read just five years ago. For those of you similarly inspired by such a connection, I highly recommend Sociology Through Science Fiction (1974), edited by John Milsted and Martin Greenberg, for further reading if you can ever get a hold of a copy (see a review here), or “Expanding the Sociological Imagination: Teaching Sociology with Speculative Fiction” at The Sociological Cinema for something (much) more recent and accessible. 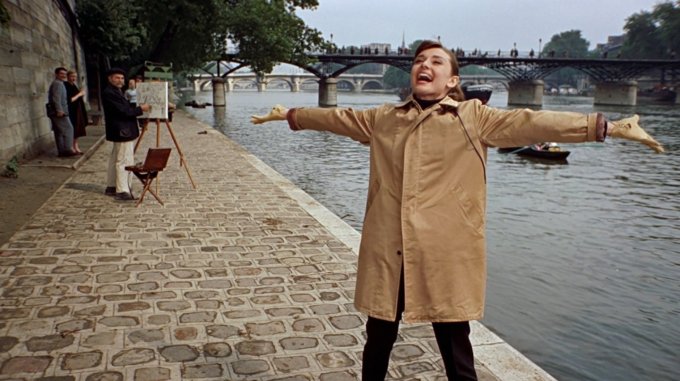 Thoughts? Any more examples, or suggestions for further reading?

Update: John from Daejeon provides some great — and really quite old — examples here. In hindsight, the Galaxy commercial only stands out for its technological sophistication, not its concept.

3 thoughts on “Raising the Dead: The Future of Advertising?”