I’m a big fan of Jill Fields’ 2007 book, An Intimate Affair: Women, Lingerie, and Sexuality. It’s where I first learned of the corset industry’s creation of new body types for women to conform to in the 1910s to 1930s, presaging the Korean media, beauty, and fashion industries’ creation of “S-lines,” “V-lines,” and so on in the 2000s. But I’ve always been skeptical of this common feature of lingerie advertisements she alleges, and especially her explanation for it (page 16):

What models do with their eyes is important. When they return your gaze, they seem to own the room. Whereas if they don’t seem to be paying attention to anything in particular, or if they’re depicted without their faces at all, the temptation to dismiss them as people and focus only on their bodies is all the greater.

It can also be a mechanism by which advertisers perpetuate stereotypes of different sexes and races. Take what Kyoungtae Nam, Guiohk Lee, and Jang-Sun Hwang discovered from their survey of Korean girls’ magazines in 2011 for instance (p. 234): 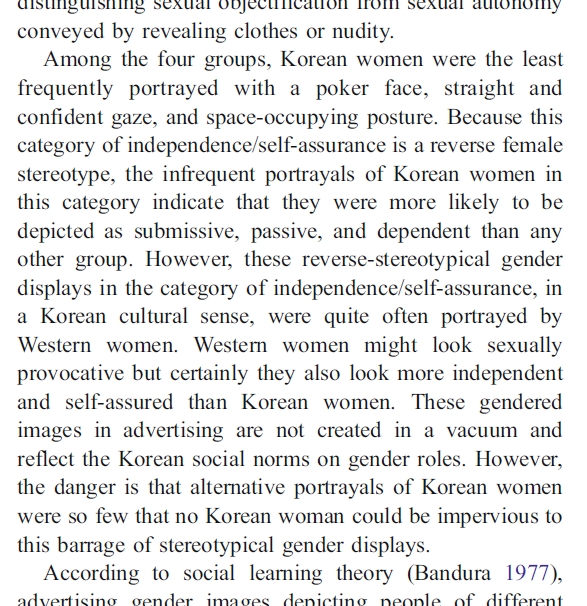 No-one’s saying models staring into space is bad in itself. Nor can advertisers of fashion and beauty-related products really be faulted for wanting to focus attention on the products, or on their alleged effects on the consumer. But if you know anything at all about advertising and gender, you’ll know that regardless of what’s being advertised, women tend to be depicted much more passively than men. And herein lies the first of two fatal flaws in Fields’ argument. For she bases her conclusions on no more than (fn. 70) an unspecified “survey of ads” in various magazines and catalogues from the 1900s to 1960s, although she also asserts that “[c]urrent issues of the Los Angeles Times provide almost daily evidence of the continuing importance of these evasive postures in ads.” Or in other words, she provides no evidence whatsoever that the tactics she describes “to dispel the homoerotic impulse” are any more prevalent in lingerie ads than in other kinds of ads, whatever period she’s talking about. And sure enough, those same tactics can quickly be found in other ads just through, say, a simple walk down the average city street. Here’s some with “women alone, turned away from the viewer” and/or averted eyes in Korean soju ads for instance:

In 2010, I discussed those and many others using Erving Goffman’s Gender Advertisements framework. Specifically, those particular ads are illustrations of one aspect of the “Licensed Withdrawal” category, as described by Images of Women in Advertising:

[One] way in which women are disempowered is by displaying them as withdrawn from active participation in the social scene and therefore dependent on others. This involvement with some inner emotional processing, whether anxiety, ecstasy or introspection, can be symbolized by turning the face away, looking dreamy and introverted, or by covering the face, particularly the mouth, with the hands….

….Rather than being portrayed as active, powerful and in charge, females are commonly shown in this licensed withdrawal mode, removed into internal involvements, overcome with emotions, or symbolically silenced with hand over the mouth….

….In another variation, females are frequently shown withdrawn inwards into some dreamy introverted state; they pose, become things for others to gaze at and desire. Males will stereotypically be shown active, engaged, and in charge of the situation. They are not so much objects for others’ to gaze at, as actors with occupations and professions….

The point being, although no motivation for these depictions is explicitly mentioned here, advertisers wanting to avoid provoking homoeroticism seems a rather unlikely one—the second flaw of Fields’ argument. Because are lingerie advertisements really so salacious, and really so sexually transgressive, that homophobia needs to be invoked to explain the depictions commonly found therein? Are they really so different to all other kinds of ads, that explanations for the depictions of women in those ads wouldn’t also apply?

I know—boobs. Maybe there is something to them that prevents (male-dominated) advertising teams and advertising standards authorities from thinking rationally. I’m not dismissing any special considerations they have for lingerie ads out of hand, and indeed Fields provides a wealth of examples of precisely those, albeit with expressions of their worries about evoking homoeroticism notable only for their absence. But she hardly persuades in addressing those alternative explanations for lingerie ads’ typical features by deliberately ignoring them. And I do mean deliberately, for in fact she does mention Goffman earlier (p. 210): 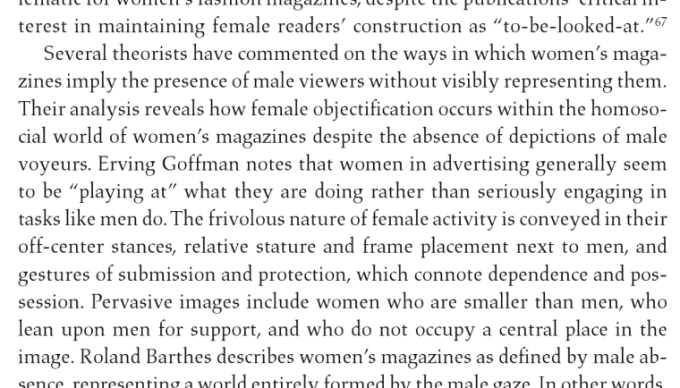 And by all means, these are things, well covered in Gender Advertisements (see my earlier post for examples from soju advertisements). But to have read the book and demonstrated that she’s taken note of those various categories of its framework, only to fail to mention that one of its largest categories—Licensed Withdrawal—already well accounts for her claims about lingerie advertisements? She doesn’t have to agree with it, but she does have to acknowledge and respond to it. Otherwise, her shoehorning of an alternative explanation evoking homophobia seems very disingenuous.

In fact, the foundations of the whole chapter may be equally tenuous. Its title, “The Invisible Woman: Intimate Apparel Advertising” refers to the tendency of early-20th Century lingerie advertisers to show only parts of women or not at all. But reviewer Jane Ferrell-Beck argues there was actually a very practical reason for this:

And reviewer Kristina Haugland goes further, arguing that “the author’s interpretation of the material is a serious concern” of the book as a whole. She cites no examples from Chapter 5 though, so let me just leave you with her conclusion: 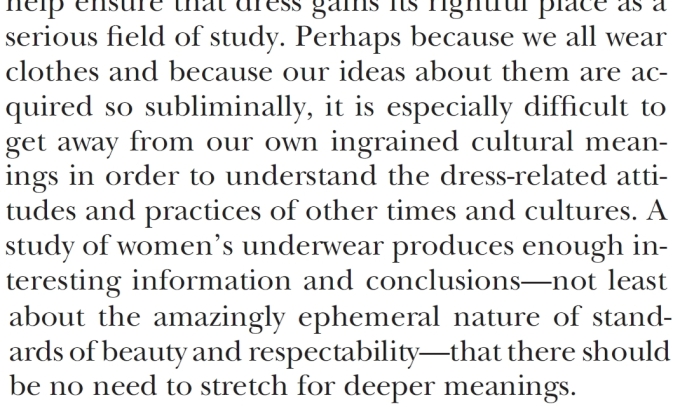 Words to live by as a colleague, our student assistants, and I wearily plod through our own survey of Korean women’s magazines advertisements this summer, of which this post is admittedly but an extended version of one of its footnotes. Thanks for reading it!

One thought on ““Lingerie Advertisements Deflect the Danger of Homoeroticism by Using Models with Averted Eyes.” Huh?”