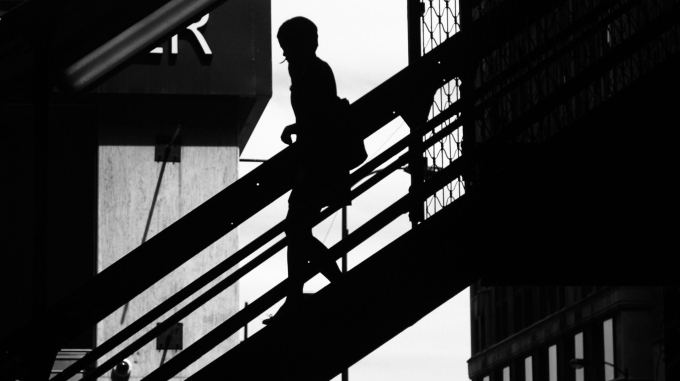 When I read that, I happened to be in a coffee shop next to Remark VILL, an expensive serviced apartment building in Busan. Last year, I highlighted the owner’s sexist, infantilizing advertising campaign, which featured then 32 year-old actor Im Se-mi enthusing about being able to rely on maintenance staff to change her lightbulbs and unblock her toilet instead of her father, as well as showing us how eager she was to lose her virginity to the male guests she could now invite. (Yes, really. Maybe there’s a good reason those commercials

are no longer available.) But while I did have to acknowledge the attraction of and dire need for the security services Remark VILL’s buildings offered their female residents, I also pointed out they represented yet another “pink tax,” which most single women simply couldn’t afford. And I have to highlight them again today too, for the exquisite coincidence of what I then read next in Feminist City: Claiming Space in a Man-made World by Leslie Kern (2020, pp. 164-165), which I’d gone to that coffee shop to finish:

“In my research on gender and condominium development in Toronto, I found that developers and real estate agents enthusiastically marketed condos to women with the idea that the 24-hour concierge and security staff, as well as technical features such as handprint locks, CCTV, and alarm systems, made condos the safest option for women living downtown. These features were highly touted when condos were arriving in ‘up and coming’ neighbourhoods that had previously been stigmatized or seen as abandoned, industrial areas. I argued then that by making condos ‘safe’ for women, developers were smoothing their path to expansion into neighbourhoods that might otherwise have been risky real estate investments. This expansion certainly wasn’t going to make life any safer for the women who would be displaced by this form of gentrification. Nor does it tackle domestic violence in any way. Furthermore, asking women to ‘buy’ their safety through condo ownership contributes to the trend of privatization, where people are held responsible for their own well-being, even their safety from crime. Making safety a private commodity in the city means that it becomes less and less available to those who lack the economic means to secure themselves. This is certainly a long way from an intersectional feminist vision of a safer city for women.”

“We may not know exactly what a safe city looks like, but we know that it won’t involve private safety measures. It won’t rely on the police to prevent or adequately investigate crimes. It won’t throw sex workers, people of colour, youth, or immigrants under the bus to create the appearance of safety. It won’t be centred on the needs and desires of privileged white women. And it won’t expect physical changes to undo patriarchal dominance.”

My apologies for the white lie of the post title: by no means is Kern only or even mainly concerned with single women in her book, with Korea—as in Seoul—only getting a total five lines in it. Critics also tend to agree on two glaring flaws: her focus on the Global North, and her lack of solutions to the many problems she outlines. Yet her narrow focus can also be considered a strength: personally, I enjoyed that her book is so firmly rooted in her own experiences in Canada and the UK as, variously, a girl, university student, mother, divorcee, single-parent, and feminist geographer, for she brings a lot of wit, personal anecdotes, and insights to those experiences that you sense would be lacking about subjects less close to home. In addition, she is at great pains throughout to point out that her cishet, middle-class, and white privilege mean ethnic, racial, and sexual minorities can have very different experiences to her, as well as to expand upon those.

Even without the coincidence at the coffee shop that threw my own objectivity out the window, it’s an easy, eye-opening, and thoroughly enjoyable read overall, which would appeal to both newcomers to the dreaded F-word and diehard urban activists alike. It should also be required reading for the (overwhelmingly) male architects, urban planners, and city councilors who generally take their own urban lives as the default norm—and so have no idea how inconvenient, difficult, ill-suited, and even dangerous their policies can be for the very different lives of female residents of their towns and cities.

If you would like something more specifically about single Korean women though, then consider Living on Your Own: Single Women, Rental Housing, and Post-Revolutionary Affect in Contemporary South Korea by Jesook Song (2014), based on interviews of 35 single women in late-20s to late-30s.

Actually, this may be a tough sell once you realize those interviews were conducted in 2005-2007; since then, Korea’s single household rate has skyrocketed, a massive demographic shift that has potentially radically transformed many of the issues that Song describes. The book is also especially frustrating for being, well, just too damn short, with less than a hundred pages of actual chapters. In particular, it lacks one on navigating sex and relationships outside of marriage, which would have been invaluable in an era when, thanks to the stigma and fear of being caught engaging in either, other academic researchers had difficulty finding any interviewees at all. Another valid criticism is that her interviewees are unrepresentative, all of them being self-selecting, all remaining unmarried by choice rather than because they lacked the means, 90 percent of them being former activists, and with a significant minority identifying as lesbian. Hence, when compared to their contemporaries, there’s the uncharacteristic strength of their shared wherewithal and inclination to brave living alone at a time when that often led to being ostracized—which Song herself recognizes.

However, she does cover sex and relationships in passing. In addition, given how “stubbornly” unmarried 30-something women are generally considered “difficult” by their families, society, and policymakers alike, with their wants and needs easy to ignore, that Song has provided material on a group so often rendered voiceless and marginalized is reason alone to order the book in my view. But its main strength is how, by (explicitly) providing such a rare examination of what a hitherto abstract concept like “developmental state” means for ordinary people on the ground, she demonstrates how the Korean state’s goals, filtered through the lenses of familial and societal patriarchy, resulted in pervasive financial discrimination against women. So convincing is she of its huge scale in fact, that actually I’m not at all convinced that aspect of single Korean women’s lives has “radically transformed” at all in the 15 years since Song’s interviewees told her about its impacts on them.

Let me finish with some examples from pages 43-44 of the second chapter, described by one recent reviewer as “discuss[ing] the economic structure that marginalizes single women in trying to finance the lump sum required to secure decent housing. Young single women were excluded not only from official financing measures, driven by neoliberal restructuring, but also conventional informal financing. She also illustrates how cultural gender norms are reflected in loan conditions that only cater for heterosexual married couples, making securing housing even harder for single women”: 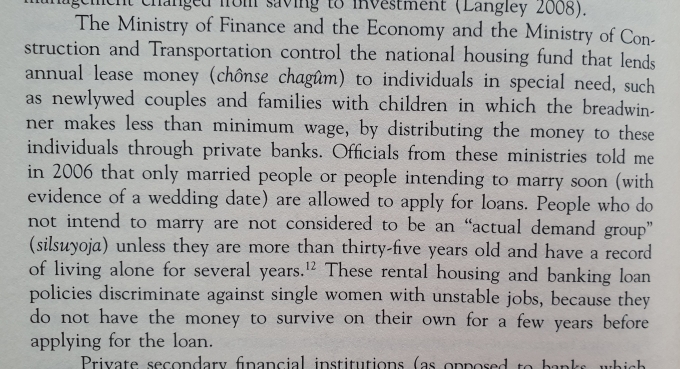 Sorry (not sorry) for not having an e-book to copy and paste from, but those are available. Meanwhile, I bought my physical copy from Aladdin in Korea, for about the same price as from publisher Suny Press.