What’s wrong with this advertisement?

When I first saw it, I couldn’t really put my finger on it, other than noting the similarity to some iconic but controversial music videos by Robert Palmer. Which was kind of ironic, considering what Park Jin-young (박진영) is putting his fingers on.

With thanks to an anonymous reader for passing it on, both these problematic elements and more are present in his new music video No Love, No More (노러브노모어), the main subject of this post. But first, a quick explanation of what was so controversial about those Robert Palmer videos exactly, for many of my younger readers may not even have heard of him.

As Alyx Vesey explains in Feminist Music Geek, the crucial one was “Addicted to Love” from 1986, and as a feminist she had trouble with it:

…for one big, obvious, highlighter-yellow reason. It’s so blatantly sexist. The models who comprise Palmer’s backing band are normatively beautiful, musically inept, interchangeable, ornamental, passive, and blankly spectacular. They’re kinda like a Busby Berkeley chorus line, only on sedatives and with visible nipples.

And while it’s a little off-topic for a post ostensibly about JYP, I think it’s worth quoting her a little more:

And yet. I can’t let this one go so easily. It’s an indelible image that is simple and yet iconic in design (it’s so effective that ”Simply Irresistible” and “I Didn’t Mean to Turn You On” only mildly revise the concept). Thus, it’s also easily replicable. When you put “Addicted to Love” alongside another lexicon 1980s video like, say, Michael Jackson’s “Thriller,” it’s much easier to match (many people, including Jackson, tried and failed to reach or exceed that video’s epic proportions).

It’s also an easy concept to subvert, which is my primary interest. I’d like to highlight a few instances where women take on “Addicted to Love” and, in the process of recasting and reconfiguration, potentially disrupt the original music video’s sexist aims.

Which I highly encourage you to check out. Meanwhile, let me also present the Simply Irresistible music video here, for I think that with the women dancing in the background, it is the most similar of the three to No Love No More:

Finally, No Love No More itself. Regardless of the criticisms in this post, it probably has the best picture quality of any music video I’ve ever watched on Youtube, so make sure to click on “HD”:

Clearly not a carbon copy of Robert Palmer’s videos then, and JYP, or whomever was responsible for them, might reasonably claim not to have been at all influenced by those. But whatever the origins, the women in the barn (and in the poster) are indeed extremely similar, and almost all are objectified.

And yet there are still more problematic elements in it, pointed out to me by the reader who passed the video on. Unfortunately, I didn’t have time to ask permission to quote her email before writing (apologies for my over-enthusiasm), so she’ll have to remain anonymous: 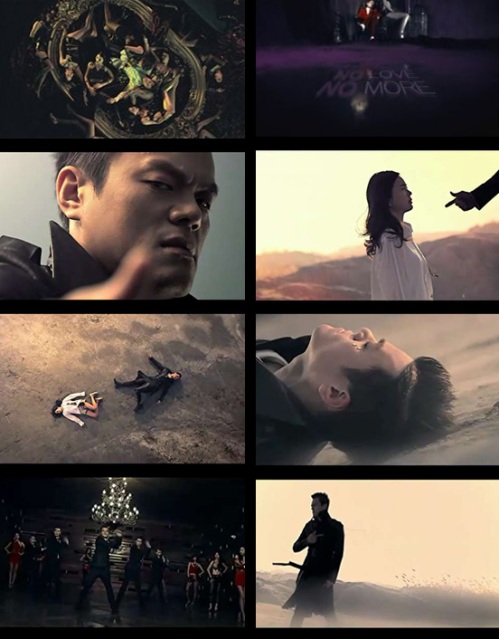 …the video infuriates me. Maybe it’s because I come from a country where explicit violence against women is not only extremely taboo but also illegal to portray in music videos. Still, given that domestic violence is such a formidable problem in this country, I find it mind-blowingly irresponsible that the most powerful man in Korean music at the moment puts out a video like this (source, right: unknown).

Shooting his girlfriend execution-style (apparently it’s okay to show her blood spraying out as her body crumples to the ground but it’s not okay to show an actual gun doing the shooting)… he then turns the “gun” on himself, and we’re expected to sympathize with him as a tear runs down his cheek as he takes his last breath. He executed his girlfriend, but the poor guy must have felt immense pain to have been driven to do such a thing. Break to the rest of the video, which simply consists of JYP dancing while dozens of women stand around or grope him as sexual props. JYP’s entire image seems to rely on the objectification of women, as demonstrated by [that poster], for one example…

…in which he is fingering a woman’s breasts, “playing her” as if she was a musical instrument. Now I’m definitely no fan of K-pop, and normally have nothing to do with it, but this video of his has been playing over and over on TV, and I can’t help but fear the message it sends young Koreans. JYP is, after all, immensely popular and influential in the K-music world, as he owns one of the most successful music labels in Korea and appears on countless TV shows and commercials. I find it surprising that no one seems to take offense to this video, which romanticizes violent “crimes of passion” (end).

I agree, and as that reader is almost entirely responsible for this post, I encourage her to give me permission to print her name so that she can receive the credit for it!

But I would of course appreciate it if any other readers had more to add, on either the music video, the poster, and/or JYP’s marketing in general. And I confess, I know little about JYP’s music. So, to any fans of his in particular, would you say that that characterization of him is fair?