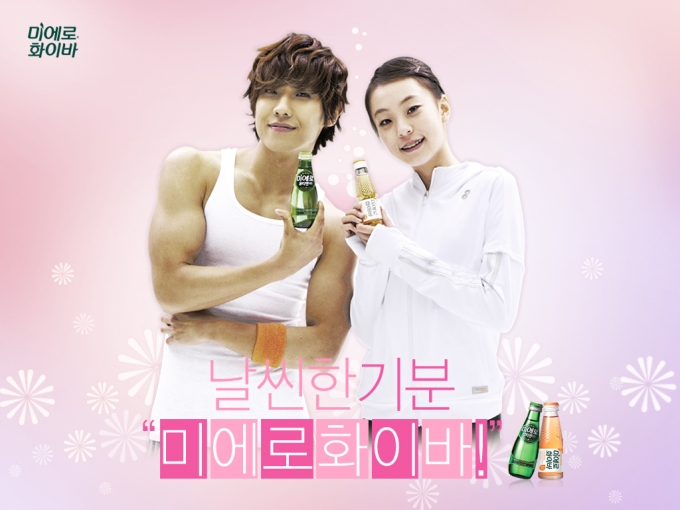 Regularly criticizing food and drink companies for marketing their products so differently to either sex, or even exclusively just to one, then I’m surprised to find I have mixed feelings about the news that one company has actually chosen to stop doing so for a change: Hyundai Pharm (현대약픔), whose Miero Fiber (미에로화이바) “diet drink” for women was ironically the first of its kind in Korea, but for which a new campaign has been launched featuring Lee Joon (이준), a member of boy band MBLAQ (엠블랙), and Kwak Min-jung (곽민정), a figure skater:

Called the second Rain (비), and gaining a lot of fans through his chocolate abs, Lee Joon of MBLAQ is with Kwak Min-jung, a figure skater who startled everyone with her remarkable growth as a skater at the Winter Olympics in Vancouver, and who dreams of becoming the second figure skating queen [after Kim Yuna (김연아)]. What are they doing meeting together? 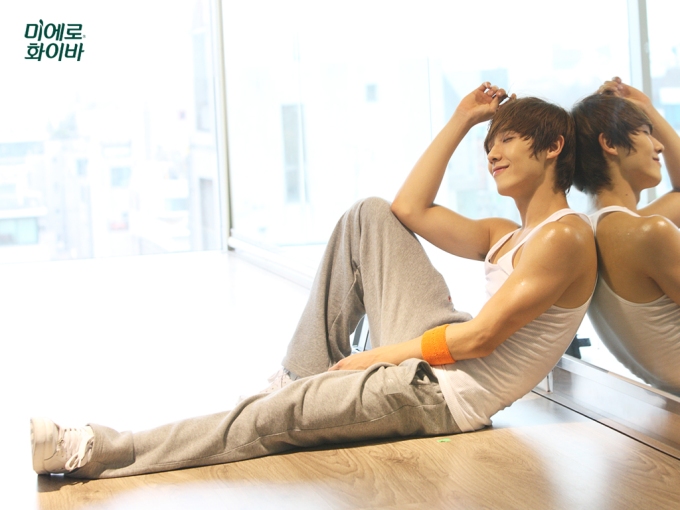 Lee Joon of MBLAQ and Kwak Min-jung the skilled athlete have been chosen as the representatives of the diet fiber drink Miero Fiber by producers Hyundai Pharm.

Miero Fiber has received a lot of love since being launched as the first diet drink in Korea in 1989, and indeed [previously unknown] female entertainers that have showed off their S-lines and attractiveness in commercials for it have included the likes of Lee So-ra, Kim Hye-su, Park Min-young, Go-ara, and Shin Min-a, to the extent that there is a rumor that appearing in one is very helpful for a female entertainer’s career!

James – That is probably just the typical hyperbole of Korean news stories, but then I did personally first learn of Shin Min-a in 2000 and Go-ara in 2006 through their Meiro Fiber commercials:

Lee Joon and Kwak Min-jung were chosen by Hyundai Pharm because the company wanted a strong, fresh image, and because both are rising stars in their respective fields. It is hoped that through this commercial, in 2010 many people will become jealous of them and also try to get good bodies.

According to a Hyundai Pharm spokesperson, “It has often been remarked that Lee Joon and Kwak Min-jung both have a kind of healthy beauty and unlimited potential,” and that “with Lee Joon’s strong and sexy image and Kwak Min-jung’s healthy and cute one, they will be effective as symbols of Miero Fiber’s healthy and beautiful concept,” which is why they were chosen as new models and why Hyundai Pharm has high expectations of them.

In the meantime, after the 2010 World Figure Skating Championships concluded last month, Kwak Min-jung returned to Korea for a month of rest, but has since returned to Toronto in Canada to concentrate on training with coach Brian Orser, while Lee-Joon has recently changed his hairstyle to look almost like a twin of his mentor Rain, raising a lot of interest and expectations among fans as to what the theme of MBLAQ’s comeback will be. (source)

Granted, not an explicit admission that Hyundai Pharm now hopes to sell to men what it previously wanted consumers to believe was only for women. But that message is pretty clear in the commercial itself:

Like my older sister [Kim Yuna], I want to do well. I also have to pay attention to my S-line, yes?

I too have to think about what I drink. Older brother [Rain]! Just you wait for me!

And on that note, it’s a pity that, yet again, athletes that have gained great bodies through exercise are endorsing a product that encourages people to think that merely slugging a diet drink is all that is required. But I do think that selling it to both sexes is still a positive step: after all, as I discuss here, unfortunately it is by no means an exaggeration to say that there is a widespread belief among Korean women that “obtaining the perfect body is possible provided one merely buys and passively uses, applies or digests various products,” and one which strangely coexists alongside a belief by men that they must do active exercise instead. Introduce the notion that men and women can obtain their desired bodies through the same means however, and you begin to challenge that false dichotomy.

On the other hand, it is a diet drink being sold, and so there is also the possibility that ads like these will simply encourage men to forgo exercise in favor of dieting (and so on) also. Which do you think is the more likely scenario?

Either way, Korean energy drinks are off to a good start!