Something about Kong Hyo-jin (공효진) got me all hot and bothered last week. And no, I don’t mean her lingerie photoshoot for Calvin Klein.

Rather, it was her ads for Uniqlo (유니클로), all over Busan at the moment. Surely, I thought, the creative team could have anticipated how their ads would look on the side of buses, and designed something that didn’t look like she was literally squashed into them?

But then I caught a subway train on Line 2, every carriage of which was decked out like this: 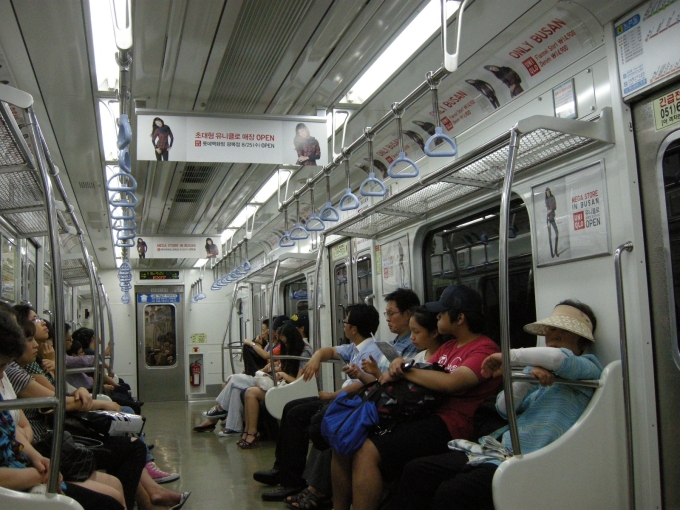 And suddenly I realized that her squashed appearance wasn’t an accident: 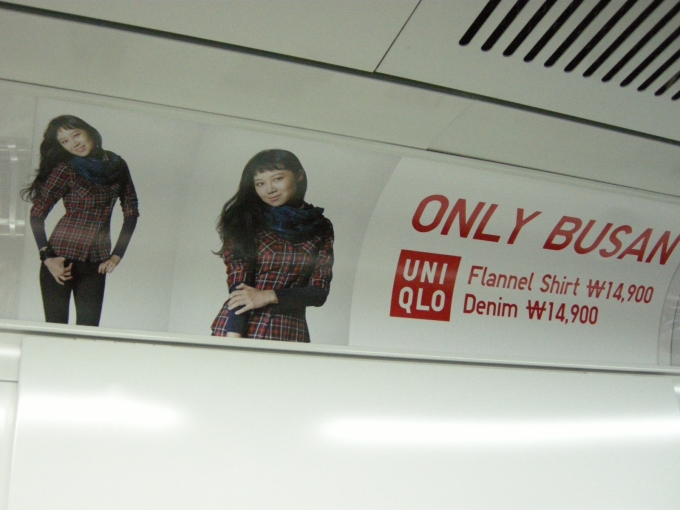 Well, just try it for yourself. Assuming that you have, and that your neck no longer hurts, then now you too may be wondering why her head was placed so awkwardly. Moreover, why is it overwhelmingly women that have this “head cant” in advertisements too, albeit not usually tilted quite so much?

Sociologist Erving Goffman believed it made women look subordinate, and hence that the disparity was evidence of sexism. But as I already discussed that back in February, my original aim here was just to pass on further evidence of the sociological pattern.

Yet the more I looked at the ad, the more I liked it despite myself. And I wanted to know why.

One possible reason, I thought, was Kong Hyo-jin’s luxuriant, flowing hair, another recurring theme of advertisements. Combined with her hands on her hips, it reminded of this ad with Kim Ah-joong (김아중) especially:

And in particular, the wind effect:

…makes it look as though whatever she is looking at (presumably a male viewer) is powerful enough to nearly blow her away while she marvels at him and waits for his approach. She doesn’t look like she intends to act, but rather like she hopes to be acted upon–sexual but still submissive.

As discussed in detail here. But of course that wouldn’t apply to all cases of women with windswept hair in advertisements, and so I did a little investigating. And just guess what I found was #1 in “The 13 Most Common Female Courtship Signals and Gestures” in my Korean edition of The Definitive Book of Body Language (p. 290)?

Basically, that says that when women see a man they are interested in, the first thing they tend to do is start touching their hair, as raising their arms allows them to more easily give off pheromones via their armpits. I’m surprised that it doesn’t also mention that it would also serve to thrust their chests out a little too, and that as women tend to have longer hair than men then touching it also shows off that secondary sexual characteristic; but it does note that even women with short hair do it, so that latter may not be all that important really.

The head cant though? It’s more complicated, and for a little while I confused it with number 7 on that list (pp. 293-4): 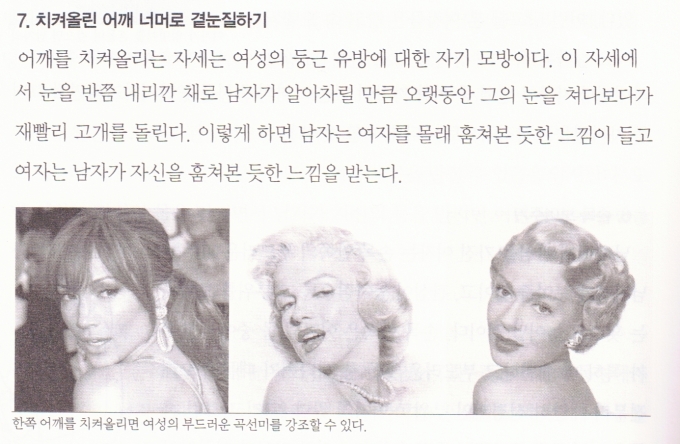 But which is not actually referring to the head cant, but rather how women will raise their shoulders and look at the object of their affection while he’s preoccupied, suddenly looking away when he looks at them (which in turn makes him secretly look at them afterward, according to the book). Apparently, the round shape of their shoulders is suggestive of breasts also, which is not as ludicrous as it sounds considering breasts themselves likely evolved (to such a disproportionately large size for primates) through looking similar to buttocks.

Still, I did know that a tilted head showed interest in something or someone though (sexual or otherwise), and sure enough I soon found this (pp. 231-2):

Apologies for lacking the time to properly translate all of the above scans; if anyone would like me to, I’m quite happy to later in the week. In the meantime, it basically says that in addition being an expression of interest, tilting the head also serves to expose the neck, the obvious submissiveness of which is exaggerated by also having the effect of making the person shorter and/or smaller, which is quite the opposite of standing up straight to emphasize our height when we want to compete or fight with others in some sense.

Finally, it notes that it is often seen on women in advertisements, although it doesn’t say why. Upon reading that though, I finally realized what many of you probably knew all along: Kong Hyo-jin is in that pose because it’s sexually appealing to men, as easily confirmed by this, this, and this article on dating advice, and that’s why I was drawn to it I guess.

Hell, even knowing all that, I still like it!

But that doesn’t mean it isn’t problematic. Or rather, that seeing that pose so often on women in advertisements isn’t. After all, there are many many other ways to appeal to heterosexual men, some quite the opposite of looking submissive, so it’s strange that that particular one would be so common (and, related, that you find women taller than accompanying men in ads much less than in real life). Moreover, why is the ad designed for a male gaze too, when presumably the intended consumers of the women’s clothes advertised are women?

But I started this post because Kong Hyo-jin’s pose looked so strange, and just because it did ultimately prove to have a logic is not to say that women in advertisements aren’t still frequently placed in some bizarre, awkward poses nevertheless. Consider the other Uniqlo advertisement in the series on the bus for instance:

Next, on the subway: 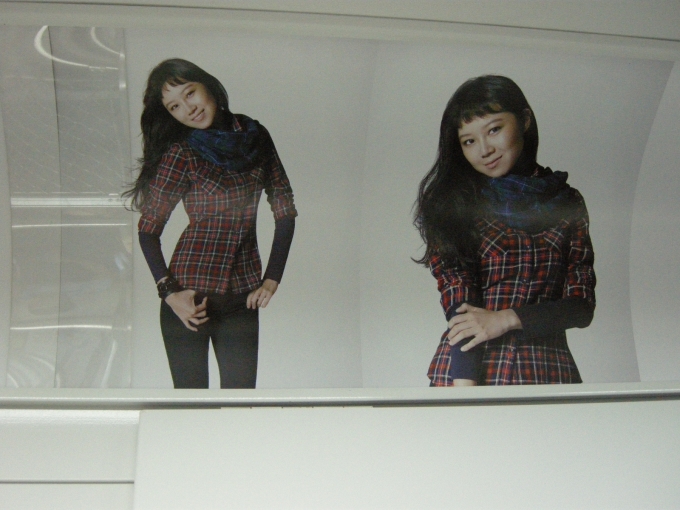 And finally, the full length version:

Now, despite deconstructing advertisements for over 3 years, just like everyone else in a developed country I too am exposed to 500-1000 advertising messages a day. So some common advertising themes I just simply get used to, a sure sign of which is that I originally thought that this was the more normal and natural-looking of the 2 advertisements, and hence had no intention of writing about it.

But in fact, it’s anything but “natural”. Again, I invite you to adopt Kong Hyo-jin’s pose for yourself just to see how strange it really is.

The crucial thing is her arms: one folded over the other, it reminds me most of a gesture that you’ll frequently see on new students and colleagues and so on on their first days at schools and workplaces. Just like on the woman below on page 103 of The Definitive Book of Body Language:

As I first mentioned here, the logic behind it is that when someone is nervous, then their instinctive reaction is to protect their exposed fronts using whatever comes to hand, be they bags, books, folders…or of course their own arms. Meeting people with folded arms doesn’t exactly create a warm and open first impression though, and so with the other partially open, hanging arm, they try to express that at the same time.

Yes, it is indeed an awkward compromise, but even having read the 1989 edition of Body Language above at the age of 13, and being perfectly aware of what I was doing (and why) thereafter, nevertheless I still couldn’t stop putting my arms like that on my first days at all 6 of my high schools (in 3 years in 3 countries). For those lacking self-confidence, as I did back then, it is an amazingly powerful instinct.

In Kong Hyo-jin’s case however, while I guess the expression of nervousness does accentuate an image of submissiveness, it’s just too much of a compromise to expose one part of the body – the neck – while protecting others with the arms. It also contradicts her “bashful knee bend” too, which I discuss here.

But why? I confess I simply don’t know, being a little mentally subdued after having to reconsider my original opinions about the first ad so much. Now seems as good a time as any then, to throw the floor open to readers, who may see something that I’ve missed and/or have alternative explanations!^^

46 thoughts on “Women’s Typical Poses in Advertisements: A Pain in the Neck?”