Opening my “Gender Advertisements in the Korean Context” lecture these days by talking about erections, I’m loath to end it on something as deflating as domestic savings rates. But then so often am I asked questions afterwards like…

Why are there such sharp distinctions in the ways men and women are presented in ads?

Why are women portrayed passively, weakly, dependent, childishly, and in awkward, unnatural poses to a much greater extent than men?

…that in my latest version for the 4th Korea-America Student Conference at Pukyeong National University (a highly-recommended 4-week exchange program by the way!), I decided to address the last by providing the data to backup my argument that it was largely because of a shared experience of housewifization. In the actual event though, the students wisely decided that they’d much rather get lunch than ask any more questions, so let me give a brief overview of that argument here instead:

In short, housewifization is the process of creating a labor division between male workers and female housewives that every advanced capitalist economy has experienced as it developed, essential and fundamental to which is the creation of a female underclass that acquiesces in this state of affairs, finding self-identity and empowerment in its consumer choices rather than in employment. Lest that sound like a gross and – for the purposes of my lecture – rather convenient generalization however, then let me refer you to someone who puts it much better than I could. From page 60-61 of this edition of The Feminine Mystique (my emphases):

The suburban housewife – she was the dream image of the young American woman and the envy, it was said, of all woman all over the world. The American housewife – freed by science and labor-saving appliances from the drudgery, the dangers of childbirth and the illnesses of her grandmother. She was healthy, beautiful, educated, concerned only about her husband, her children, her home. She had found true feminine fulfillment. As a housewife and mother, she was respected as a full and equal partner to man in his world. She was free to choose automobiles, clothes, appliances, supermarkets; she had everything that women ever dreamed of.

In the fifteen years after World War 2, this mystique of feminine fulfillment became the cherished and self-perpetuating core of contemporary culture.

Why is it never said that the really crucial function…that women serve as housewives is to buy more things for the house… somehow, somewhere, someone must have figured out that women will buy more things if they are kept in the underused, nameless-yearning, energy-to-get-rid-of state of being housewives…it would take a pretty clever economist to figure out what would keep our affluent economy going if the housewife market began to fall off.

Ironically, by 2009 more women would actually be working in the US than men. But rather than the result of enlightened attitudes, this was primarily because layoffs were concentrated in largely male industries like construction, and I am unconvinced that the above dynamic no longer applies there.

In Korea however, the exact opposite happened. Moreover, while by no means are modern Korean notions of appropriate gender roles a carbon-copy of those in the United States in the 1960s and 1970s, even if Korean women themselves are saying that the parallels between Mad Men and Korean workplaces are uncanny(!), the fact remains that in a society where consumerism was once explicitly equated with national-security, there also happens to be the highest number of non-working women in the OECD. It would be strange if the gender ideologies that underscore this decades-old combination were not heavily reflected in – nay, propagated by – advertising.

This is a simplification of course, one caveat amongst many being that the Korean advertising industry is actually heavily influenced by the Westernized global advertising industry (see this post on the impact of foreign women’s magazines in Korea for a good practical example of that). But, also raising the sociological issues of Convergence vs. Divergence, and the role of Base and Superstructure, the main purpose of my finishing my lecture with that explanation is to leave audiences with encouraging them to think for themselves, by giving them just a tantalizing hint of how deep the sociological rabbit hole goes.

Yes: it’s a cliche, but Gender Advertisements is very much a red pill. In particular, consider what greeted me at work just two days after giving the lecture: 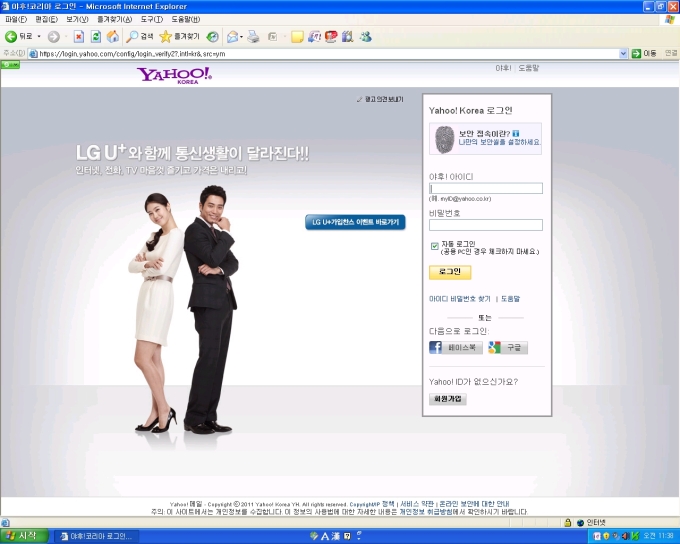 I don’t know their names sorry (anyone?), but I was struck by the different impressions left by the man and the woman’s poses. Whereas he seems to be engaging the viewer’s gaze, the finger on his chin implying that he is actively thinking about him or her, in contrast the woman’s “bashful knee bend” and “head cant” make her appear to be merely the passive object of that gaze instead.

For more about those advertising poses, see here and here, especially on how they arguably make the person performing them subordinate in many senses, and – regardless of those arguments – the empirical evidence that women do them in advertisements much more than men. Indeed, while that advertisement was perfectly benign in itself of course, and you possibly nonplussed at my even mentioning it, just a little later that week I saw this similar image with Han Ye-seul (한예슬) and Song Seung-heon (송승헌) in a Caffe Bene advertisement, outside a branch opening close to my apartment: 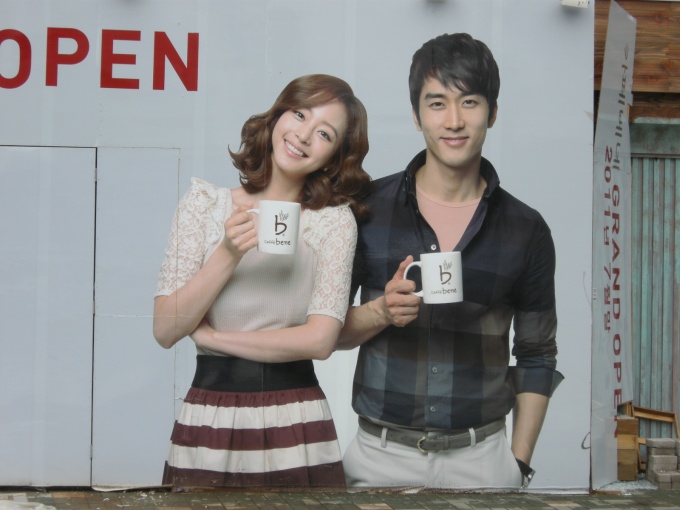 Granted, the head cant helps frame the couple, and the ensuing contrast between the two models makes for a more interesting picture. But neither explains why it’s more often found on women than on men. Moreover, primed to look for more examples from then on, for the rest of July I saw plenty of advertisements featuring women by themselves doing a head-cant, and a few with men by themselves doing one. But when a man and woman were together?

Call it confirmation bias, but it became a slightly surreal experience constantly only ever seeing the woman doing it (it’s one thing to know about something like that in an abstract sense from academic papers, quite another to experience it for yourself). Here’s an example from a recent trip to Seoul: 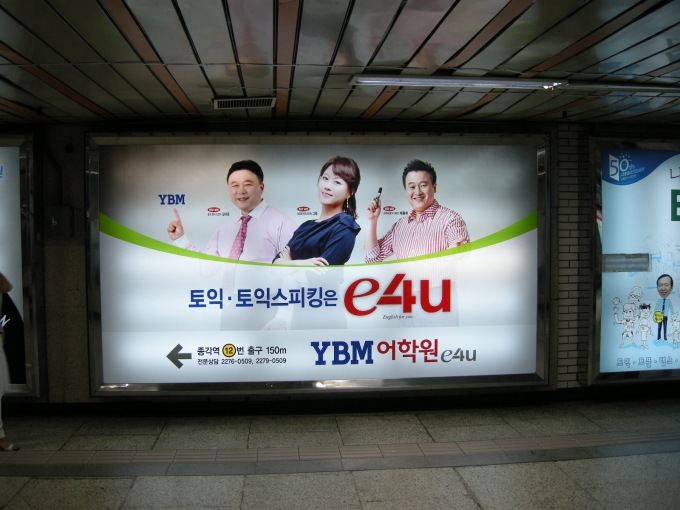 Another with Lee Min-jeong (이민정) and Gong-yoo (공유) in Seomyeon subway in Busan:

One more with Wang Ji-won (왕지원) and Won-bin (원빈), commercials of which are playing on Korean TV screens at the moment:

Only after 4 weeks(!) of looking, did I finally find a possible example of the opposite in Gwanganli Beach last Saturday (with Song Seung-heon {송승헌} and “Special-K girl” Lee Soo-kyeong {이수경}):

Having told you about the difficulty I had in finding such an ad though, then Murphy’s law dictates that you’ll probably see one yourself very soon; if so, please take a picture send it on, and I’ll buy you a beer next time we’re both in the same city. But it wouldn’t surprise me if I don’t actually hear from anyone until September!

Update 1: Literally just as I typed that last, the headline that “Women till stereotyped in TV ads” appeared in my Google Reader. I should feel vindicated, but I actually find the study described quite superficial, the conclusions meaningless without reference to that fact that roughly 75% of Korean advertisements feature celebrities. Still, I’ll give the National Human Rights Commission the benefit of the doubt until I see Korean language sources.

Update 2: The Korea Herald also has an article on the study, but it’s virtually identical.