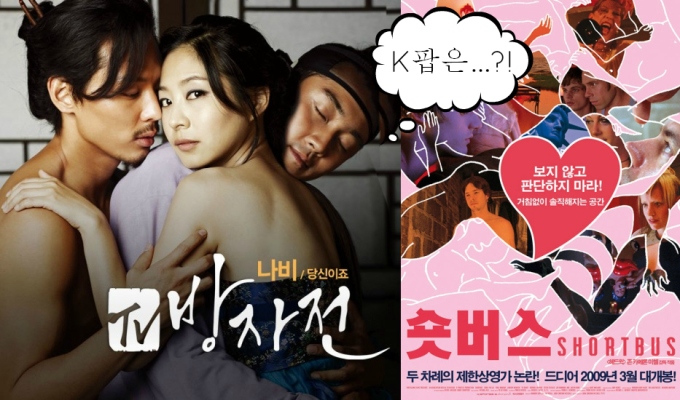 With so much attention on restrictive censorship in K-pop these days, it’s easy to overlook how much standards in movies have actually been relaxed in recent years. See my latest column in Busan Haps for more information, especially if you’ve never heard of Shortbus before…

But please let me reiterate here though, that the freedom to show more sex and nudity in popular culture is just one aspect of becoming a more sexually liberal society. For sure, it’s a step in the right direction, and can have positive knock-on effects, just like the first kiss in a Korean ad in 2009 lifted the taboo on PDA for a lot of young couples for instance. (Yes, only anecdotal; but prove me wrong). But on the other hand, with the (re)criminalization of abortion by the Lee Myung-bak administration, recent attempts to limit access to the contraceptive pill, and the continued stigmatization of single mothers, you could reasonably argue that Korea is really just as sexually conservative as ever. No matter how much T&A you can see on the silver screen now, and which is often (usually?) just for financial reasons anyway.

In short, it’s complicated. Anyone that’s been here more than a couple of years, what impressions do you get? And how do you think things will change after the elections?