And I’m not afraid to quote poetry to justify it! 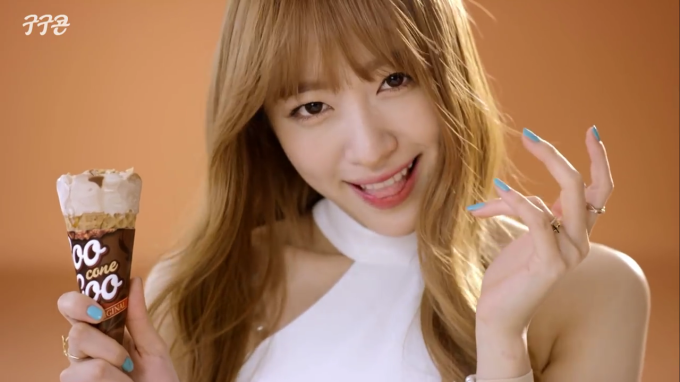 are a form of grace,

Desire rains on your exquisite face.

Afroditi has honored you exceedingly.

The word “sensual” has always been a favorite of mine, once I learnt it was brimming with sex. Even just to say it can feel like a carnal act, if you let it. Close your eyes, linger on the syllables as you would on the face of a lover, and the tip of your tongue teases you with memories of all the places it’s been—and hints at the pleasures still left to explore.

Foods that can similarly be luxuriated over then, lend themselves to sensual advertising. Take ice-cream. I don’t eat it like you see in the ads, and neither do you. But I get them. Being allergic to dairy, so not eating my first ice cream until I was seventeen, I really do relish the soy variety when it makes one of its rare appearances in supermarkets here.* I even have a bottle of Kahlua saved specially for just such occasions.

Not unlike Kahlua or even sex itself though, too much of the same thing can easily become boring and routine. That you and I can both roll our eyes at the notion of orgasming over ice cream, only points to how advertisers sexing it up is so routine as to be mindless cliché. Just so routine in fact, that by 2019 Baskin Robbins Korea seemed to have forgotten they were doing it at all, and were forced to withdraw and apologize for an ad where they’d replaced the usual woman with an 11-year-old girl wearing cosmetics.

And I do mean “the usual woman”: 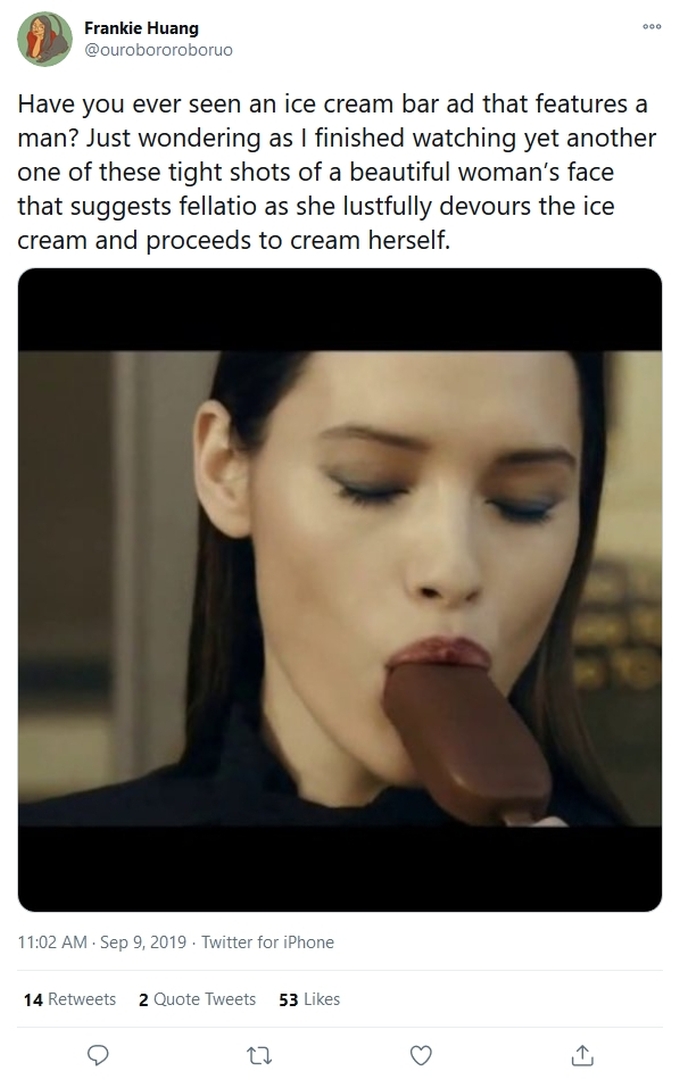 Issues this gender imbalance raises include the strong potential to infantilize women while simultaneously sexualizing girlishness, and the suggestion that women are just too damn hormonal to think rationally:

[There is a] powerful, symbiotic relationship between women and carnality, as indicated by the preponderance of erotic narratives in advertising addressing women. This is particularly overt in the advertising of products that are depicted as being endowed with the power to enable women to experience intense quasi-sexual pleasure from their consumption. Examples of such product categories include chocolate, luxury ice cream, biscuits, and shampoo. This is a world that reflects a perception of women as ‘consummate consumers’ who are ruled by their bodies and, as such, are less able than men to resist the lure of carnal pleasures (Belk 1998; Belk and Costa 1998).

But I sense EXID fans are getting a little frustrated by this point. Posting an infamous, bawdy, 2012 Japanese commercial for Gligo’s Dororich Creamy Cafe Jelly in a moment is hardly going to help either.

There is a method behind my madness. First, I needed to take advantage of my recent purchase of a book on Sappho to establish some cultural capital, in the hope I’d have at least a shred of credibility remaining by the end of this post. For what male feminist/feminist ally would ever admit to being utterly transfixed by this?

The Korean media couldn’t make that concession however. Take one of the first reporters to cover it:

Contradicting themselves, even more stimulating elements were listed; alas, those did not include the symbolism of the spurting cream. Later reporters (or their cautious editors), if they mentioned the cream at all, only caused themselves more embarrassment in their Kakfaesque refusal to acknowledge the completely obvious:

“And white liquid is coming from out of nowhere.”

“In addition, it is criticized because the scene in which white liquid that symbolizes milk is being poured over the girls is triggering strange imaginations.”

““And white liquid that seems to be milk is continuously being sprayed.”

I realize there may be official or unofficial rules in the Korean news media regarding acknowledging explicit content, even symbolism. Absence of evidence is not evidence of absence either, and it would remain a blessing to find an official news source that, in reporting on this commercial, hadn’t patronized its readers over something so trivial.

Be that as it may, the next reason, and finally, is because now you know exactly what went through my mind when I saw EXID’s commercial for Lotte’s Goo Goo ice-cream a few years later:

I only didn’t write about it at the time, because I expected the media and fans to immediately be all over it. Gligo’s Dororich Creamy Cafe Jelly commercial, after all, made quite the splash in social media when it came out. It took balls, I thought, for Lotte to be so brazen about the origins of its own very literal money shot.

But, crickets. Whereas some reporters did point out the new, sexualized direction for Goo Goo’s advertising, most merely gushed about the endorsement choices in their typical advertorials. Social media too, or at least in respect to this commercial, seemed surprisingly reticent on the subject of ejaculation, and to have completely forgotten about the Creamy Cafe Jelly. By the time I realized people just weren’t talking about it, the moment for laying a world exclusive claim to this cosmic connection had passed.

I was loathe to end without a conclusion too. Perhaps on such an indecorous subject though, in which the innuendos came thick and fast as I typed (believe me, it’s easier to just roll with them), there wasn’t one to be made?

Still, the sexy ads and commercials will continue regardless, symbols of orgasming will always be an indelible part of that, and sex and K-pop are synonymous. Indeed, after the 2012 Japanese inspiration, then EXID’s 2015 sequel, 2018 saw JooE of Momoland step up in her commercial for Baker 7. Or rather, her “mother” and gardener:

I invite readers to offer any more examples, and to come to their own conclusions about them. To prepare for the 2021 follow-up, what do you think needs to be said about sexualization in ads, and about the gender imbalance in those selling chocolate, ice cream, biscuits, and shampoo? Is it necessarily bad if they depict orgasms? Please let me know in the comments!

• “Spring Girls,” by Sunwoo Jung-a, Is Both Feminist and as Sexy as Hell. Let’s Give It the Attention It Deserves.

• Watching SPICA’s “Tonight” is an Awesome Teaching Moment About the Male Gaze. Here’s Why. (Part 1 of 3)

• “With Throbbing Heart and Trembling Hands, the Groom Undresses the Waiting Bride, to Unveil the Mystery”

*If you too are desperate for soy milk ice-cream in Korea, try specialist cafes and CU convenience stores. Supermarkets in my area have sometimes stocked it over the years, but always discontinued it after just a few months.