Once again, Korea has gotten the lowest score of all high-income countries in a recent survey of gender-equality worldwide. And, at 104th out of 131 countries surveyed, it was bested by numerous much poorer countries at that.

Given that record, then it’s very easy to focus on Korea’s shortcomings when talking about gender issues. But that can mean that we can easily miss the positive developments that are occurring though, and sometimes right in front of our very noses.

Take what this humble-looking subway ad for instance, and what it ultimately represents. First, a translation:

Women and children who are the victims of family violence, sex trafficking, school violence, and sexual abuse can receive protection and treatment at the center.

Experts in many fields such as doctors, nurses, clinical psychologists, psychological therapists, family and sexual violence consultants, and female police officers and so on will be permanently stationed at the center, and when you are in a crisis you can receive the best professional and highest quality consultations, medical treatment, psychological counseling, legal advice, and assistance with launching criminal investigations. All these services are provided free of charge. (end)

In my experience, usually the amalgamation of two government institutions in any country is in response to cost-cutting. Fortunately however, there’s a great deal of indirect evidence to suggest that that isn’t the case here.

First, note that the ad is actually quite dated, mentioning that the amalgamation was effective from January the 1st for instance (although the center didn’t officially open until February the 9th), and in particular that the Ministry of Gender Equality has a supporting role in it, whereas the Ministry actually reconverted back to the Ministry of Gender Equality and Family Affairs (여성가족부/MOGEF) back in March. Presumably then, the ad has already been posted on Busan subway trains once before, probably late last year or early this one.

Why suddenly post the same ones again in late September then? What has changed to prompt that?

As Matt at Gusts of Popular Feeling has well-documented, what has changed is the public perception that there has been a sudden and dramatic increase in the numbers of sex crimes against children, whereas in fact they have remained steady (but appallingly high) for years:

There is not a “recent series” of such sexual crimes – this is always happening. It’s just that the media has decided – as it does whenever a particular case angers people – to highlight these cases, which would usually either not be covered or covered by perhaps only one or two media outlets, and which are now linked together in articles in order to point to a great problem that exists. To be sure, there have been several laws passed since the murder of Lee Yu-ri in March (and the Yeongdeungpo case in June), and it’s great that the issue has finally gotten enough attention to get things moving (see here for a brief history of the slow pace of change since 2006). I’m not entirely sure that the solutions being offered are always the best ideas, however, and public fury (and worry) whipped up by this media coverage may be putting pressure on politicians to act first and think later.

And see past Korean Gender Reader posts for more details of those and other sexual crimes. By coincidence, one of the most notorious of those – the murder of Lee Yu-ri – also occurred in Busan, and several of my coworkers here have reported seeing rooms like that on the right pop up in Busan public schools they teach at in the months since, although unfortunately they have no information on the quality of their staffing or how often they are utilized. Have any readers also noticed them, in Busan or elsewhere?

(Note that the English translation on it may be a little misleading though: a better one would be “Consultation Room [for] Mental Anguish [caused by] Sexual Harassment or Sexual Violence”)

Regardless, the point is that given the current climate then it would be wise for the government to highlight all it is doing to prevent sexual violence, let alone to continue or even increase funding to women and children’s centers. And however cynical and reactionary the motives, this is to be applauded.

Granted, the amalgamation was decided and instituted well before the public outcry over the supposed recent spate of sexual crimes against children. But that doesn’t necessarily imply it was the result of a reduction of funding: although it may receive little if any funding from MOGEF for instance, I find it significant that the Ministry’s assumption of old responsibilities came with a big increase in staff and 4 times larger budget (albeit from a base of 0.03% of the government total), so when the plans for the change were announced late last year there was already a political climate conducive to more funding for feminist causes.  Signs of a change of heart from President Lee Myung-bak also perhaps, who originally promised to abolish it before his election, only to back down and merely considerably downsize it in response to protests afterwards?

Alas, quite the opposite: in fact, he is using MOGEF to raise the dire birth rate by – wait for it – criminalizing abortion, as I explain in detail here. But to play devils’ advocate however, perhaps this blinds us to some of the positives that it has achieved?

One is its survey of teenage entertainers in August, which – among other things – revealed that many were pressured by their managers to wear revealing costumes, and which ultimately resulted in the National Assembly’s setting up of a committee (albeit under a different ministry) to further investigate MOGEF’s findings. And which after hearing evidence from entertainment company CEOs has just laid down new regulations for the treatment of minors in the entertainment industry (see here and here also for more background).

And finally, take the recent video produced by MOGEF below, which encourages people to pay more attention to the needs of immigrant women. Granted, it’s just a video, and again it may be just be in response to the recent murder of a Vietnamese bride by her husband after only 8 days in the country (see #13 here), but then it’s not like such efforts started only recently. One thing that instantly comes to mind for instance, is the above survey that was sent to all foreign spouses in Korea in August last year (see #3 here), in an attempt to better find out their specific needs.

Any other positives readers can think of, however minor, then please pass them on!^^

Update: As per request, here is what the voiceover in the video is saying (and I’ve put the additional text in brackets as it came up):

The things that make it difficult for migrant women… (8, 452 consultations for married couples having difficulties)

…the strange environment, the different culture…

Please be strong and supportive to them.

This campaign is brought to you by MOGEF and The Lottery Commission. (Migrant Women’s Urgent Help & Consultation Centers: 1577-1366) 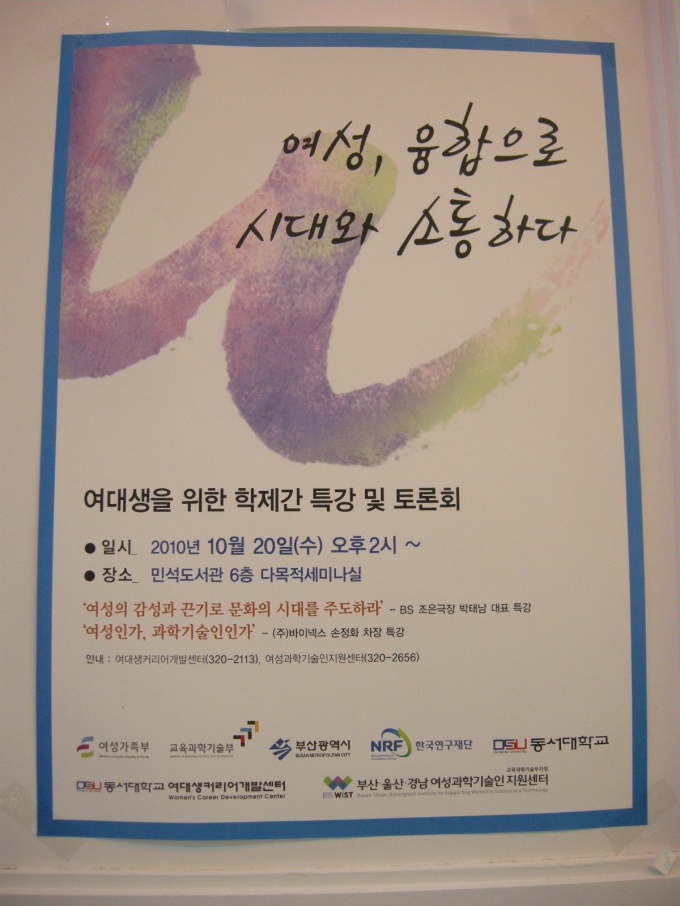 And by coincidence, something else positive that MOGEF has some role in: a seminar about women’s career development at my university tomorrow (stalkers, take note of which one). Things like this seem to go on there at least once a month or so.

Maybe this has something to do with that, which I only just noticed today: 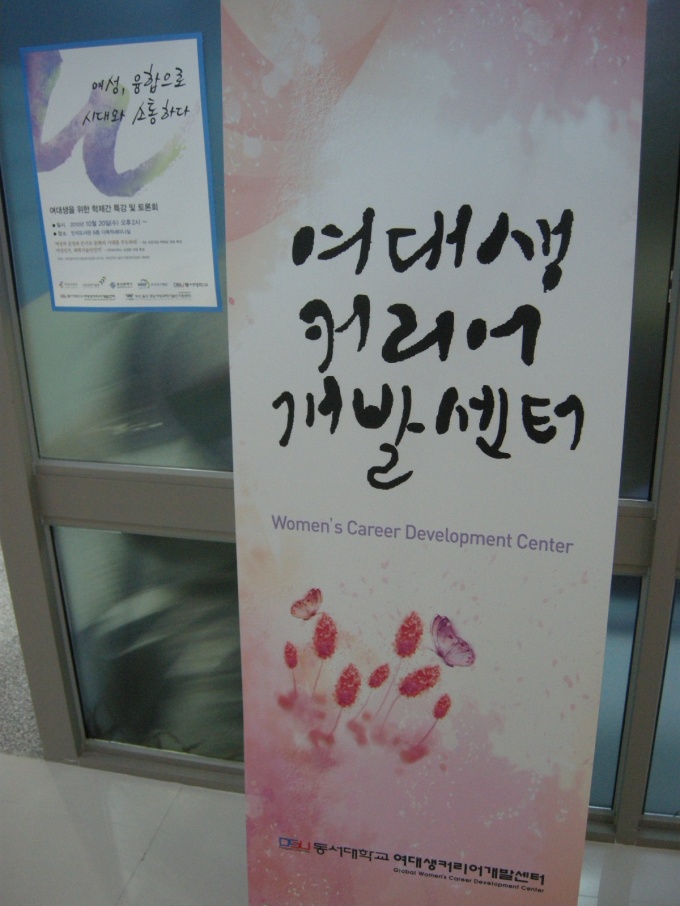 Please let me know if anyone would like a translation of the first poster. Meanwhile, do any other Korea-based readers have anything similar at their own universities?