Sorry for the slow posting and unanswered emails and comments everyone: I was busy with preparing for a guest lecture at Keimyung University held last weekend, and have been sick with stomach problems ever since (I’ll spare you the details)!

1) Photoshopped or Not? A Tool to Tell

Thanks to everyone who told me about this new software tool for detecting photoshopping. If this is the first you’ve heard of it though, probably the following paragraph from the Economist gives the best basic introduction:

Professor Hany Farid, a computer scientist at Dartmouth College in New Hampshire, and his PhD student Eric Kee, have been investigating photo retouching. They have developed a mathematical expression to quantify ballooning bosoms and winnowed waists. Their paper, published today in the Proceedings of the National Academy of Sciences, describes how they use mathematical models along with subjective human responses to produce a score of how radically a person’s image has been modified from an original photograph.

Even though there does seem to be an increasing backlash against excessive photoshopping in recent years, at least in Western countries, the exposure this paper has received in the media has still been (pleasantly) surprising, with articles on it published in the likes of the New York Times, the Guardian, Nature, and Wired. I think the reason is that several European governments have already been looking for ways to quantify how much a particular image has been manipulated, to be put as some sort of numerical rating next to it wherever it is displayed, and this new software provides exactly that. Indeed, I wouldn’t be surprised if such disclosures become required by EU law within the next 5 years, especially now that this software is available.

With excessive photoshopping not so much being critiqued as almost celebrated in Korea though (see here, here, here, and here), I’d hesitate to predict when or even if the Korean government will ever do the same. After all, one of the advertisements mentioned in the last link (posted again above; source) was plastered all over the Daegu subway on my trip there last week, despite making Lee Da-hae (이다해) look like an alien, and this week my wife’s and even children’s passport photos were automatically retouched by the photographer before we received them!

Update 1 – To play Devil’s Advocate, my wife says that our children’s photos were primarily retouched to ensure that their ears were visible, and that the background was completely white (their messy hair obscured both). I don’t seem to recall having problems when I was a kid with messy hair myself, but it’s certainly possibly that passport photo requirements have changed since, and by no means just in Korea. Can anybody shed some light on this?

Update 2– With thanks to Brian in Jeollnamdo for passing it on, here is a post doing just that! 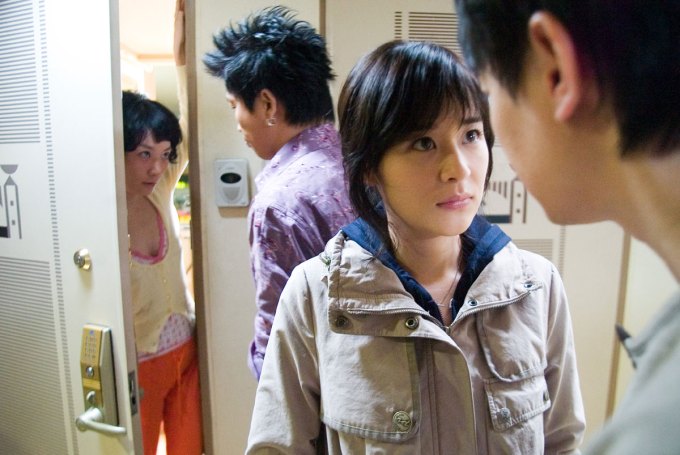 Reposted with permission from My Musings (thanks!):

i’ve been thinking about this for a while; and the thoughts i have around this topic is not yet fully fleshed out. but while i was watching this korean talk show called “sae ba qwe” that airs on MBC on saturdays, i was reminded of this topic that doesn’t sit well with me and i need to air it out some.

there’s this confusing and ignorantly dangerous message about personal boundaries within romantic relationships (actually, in all relationships, it seems) that went on blast, yet again, in the korean media.

they were talking about what women prefer more:

1. that men initiate “skinship” (aka physical affection through touch) without asking
2. that men ask permission before initiating “skinship” (source, right)

(alarmingly,) majority of the panel on the talk show picked option 1—that men do not need permission; that somehow, being in a relationship is an umbrella consent for skinship. thank God the panel was wrong—the group of women interviewed for this show this week supported option 2: they like being asked for permission.

it’s a slippery road; this assumption that agreeing to be in a relationship is somehow is equivalent to the green light to any and all kinds of skinship any time.

before i start harping on the patriarchal ideas that this seems to support and how backwards and misogynist my culture can be, i want to note something bigger than just gender issues at play here. this is a boundary thing that my korean culture (doesn’t) deal with that’s different from the western culture that i live in.

this seemingly alarming lack of regard for personal boundaries isn’t just about physical boundaries between a man and a woman within an intimate relationship. there’s lack of clear limit in emotional and social boundaries as well. it’s present in relationships between parent and children; teachers and students; even in boss and employee. consent and having to ask for one seems to mean something different in this cultural context than what i can make out through my western and very feminist lenses.

i haven’t fully figured it out what/how to make sense of it and where i stand on this lack of boundary thing for various reasons. i’m keeping my eye on it though, for sure.

Wikipedia, by the way, says the word “skinship” is derived from Japlish. It doesn’t mention though, that in Korea in at least its overwhelmingly used for couples, rather than for friends or parents and children (is this also true in Japan now?).

It’s funny though, that regardless of how strong the female characters are, and regardless of how “feminist” they are supposed to seem, in a Korean drama there is always a  situation where a guy kisses her although she doesn’t want to, and then finally she gives in and kisses him back. Just a thought; is this really a good way to present relationships to a young audience? That it’s ok for a guy to kiss the girl even though she says no?

Update 2 – Please see here for My Musing’s response to the comments thread, and a clarification of her first post.

(The first interracial kiss on US television, November 1968)

And with the statistics to prove it. A must-read from My Kafkaesque Life, with many parallels to Korea.

A South Korean woman who suffered repeated sexual harassment at work will be awarded compensation, the state workers’ welfare agency said in a landmark ruling which acknowledged her suffering amounted to a work-related injury.

Saturday’s judgment marked the first time that suffering caused by sexual harassment has been classed as a workplace injury, and many other victims are now likely to file similar appeals with the agency, the Yonhap news service reported.

Read the rest there. Also, you may be interested in this case from April last year, about the first woman to successfully sue Samsung for sexual harassment.

From the Jeju Weekly:

On Nov. 19 at Art Space C in Jeju City roughly 40 people, mainly Westerners, were on hand to watch “Miracle on Jongno Street,” (종로의 기적) the first Korean documentary about homosexual men. In his debut as director, Lee Hyuk-sang has created a film that shows the daily lives of four gay Korean men living in a society that has yet to accept them as equals.

Released nationwide at 20 theaters on June 2 of this year, the film follows Joon-Moon, film director; Byoung-gwon, a gay rights activist; Young-soo, a chef who moved to Seoul from the country; and Yol, an HIV/AIDS activist who wishes to live in a world that accepts his partnership with his HIV-positive lover. Connected around Jongno Street in Seoul, a “little paradise” for homosexual men according to the film’s synopsis, the documentary does much more than simply depict their lives as gay men, but attempts to break down walls of prejudice and show that their hopes, dreams, and goals are the same as those of heterosexuals.

Read the rest there. Has anybody seen it?

(The name, by the way, probably derives from that fact that Jongno is well-known for its LGBT [especially gay?] hotels and bars)