Today’s post is a collection of encouraging images and words from the incredibly woke students of the Ewha University Women’s Committee (이화여성위원회/@ewhalovewom), which were used in their 16th Feminism Festival.

I hope you’re inspired by them, and I’d love to hear of any similar examples, and/or of anything else you’d like translated. Especially if they’re related to International Women’s Day that is coming up in a couple of weeks, and will help spread the word about Korean events :) 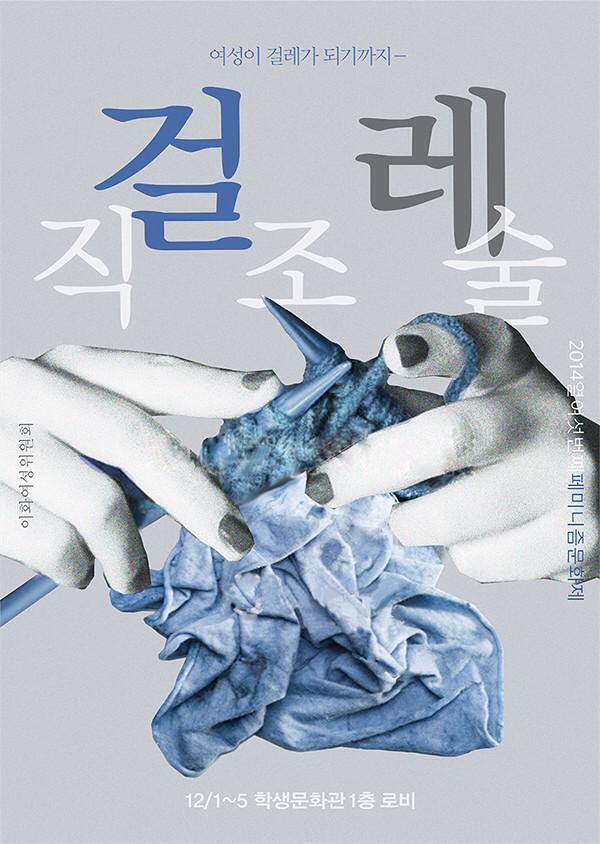 The title of the festival poster reads “Becoming a slut.” (Lit. “The technology/method of weaving/making a slut.”) 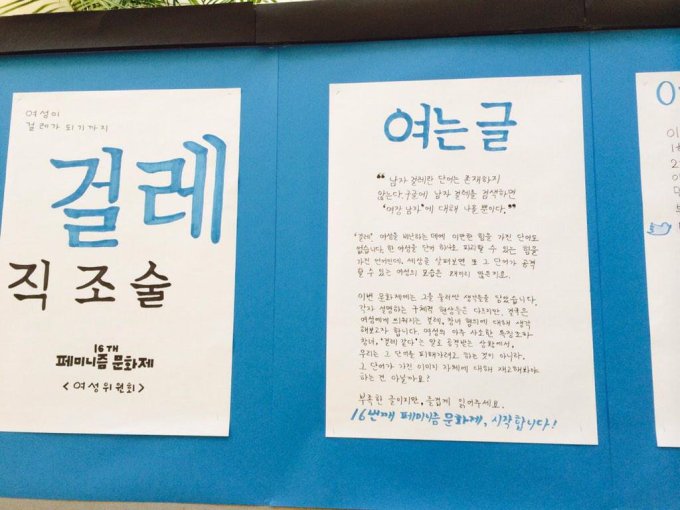 From a noticeboard at the event.

A word for a “male slut” doesn’t exist. If you search for it on Google, you’ll only find “transvestite.”

“Slut”: there’s no more powerful word for criticizing women. It has the power to destroy them. In practice, it is used in so many ways to attack women.

We are going to think about that at this festival. Everyone’s situation is different, but we need to talk more about the words “slut” and “prostitute,” and to redefine them. When even the most trivial things about women are used to attack them as sluts, rather than avoiding the word shouldn’t we instead reconsider the images the word evokes?

Although what we have written is not eloquent, please enjoy reading it.

If you don’t look naturally at the many varied forms of women’s lives, but only look at them through one twisted lens, then that is a form of misogyny. In the end, it’s not that people hate women living alone or studying abroad per se. I think it’s more that people look suspiciously at women who are not under the protection of their families, calling them sluts.

“Nobody can avoid being accused of being a slut.” (Hee-da)

How can it be convincing when you say that “The cause of sexual violence has nothing to do with women’s exposure” on the hand, but on the other hand say to women “Don’t wear such revealing clothes”?

If you talk about women working as tenpro* by just using that label, as if they were just numbers rather than real women with real names, then you’re dehumanizing them and indirectly criticizing them. Instead, we can talk about why they became tenpro, and how come that kind of profession exists.

“Even if they are numbered, their names are not numbers.” (Bam-cha)

*This means “high class prostitute”; am embarrassed to say this was the first time I’d ever heard of this surprisingly common word.

A teacher and a prostitute. Or, a prostitute and a teacher. I hesitate at the point where these two subjects meet. But the more I hesitated, the more I thought I should write about this. This is about my fear and insincerity when I met a prostitute.

“This is about those things.” (Sung-hyeon.)

To a woman, labeling her a “prostitute” is like a warning to other women, which forces those other women to act modestly and appropriately. Ultimately, it functions to control women.

“A phase of the university festival.” (Yeon-o) 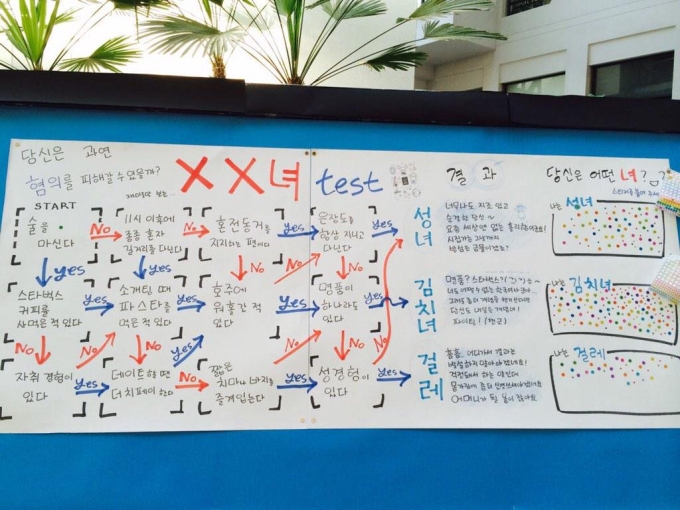 This one, a test for whether you’re a saint, a kimchi-girl, or a slut, looks like a lot of fun, but formatting it for this post looks a little difficult sorry. But I’ll happily try if anyone asks.

Underneath, people are encouraged post about taboos and unwritten rules they’ve heard. The three examples at the top read:

Apologies that the festival was actually held two years ago BTW, as eagle-eyed readers will already have spotted. But those images still resonate, which is probably why they somehow surfaced in my Twitter feed last week. So too this tweet below, which I think is speaking about stereotypes of passive Korean women, but am not sure if it’s critiquing them or perpetuating them sorry (even my wife struggled with its meaning). Hence this post, just in case in was the latter!